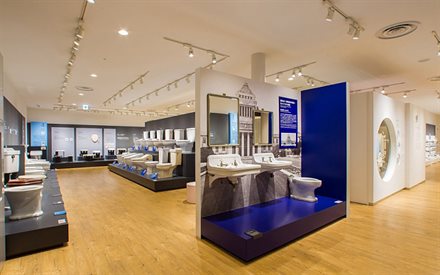 I don't know if you've ever sat on one of those futuristic Japanese toilets, but they will change your life. In North America and Europe, toilets plug into the plumbing, but in Asia, most of them are also plugged into the electric supply.

The things have more buttons than the remote control than your television, and boy do they make you feel happier—between the seat warmers, odor neutralizers, and the mystically accurate bidet jet that hits a bullseye every time, they're wonders of technology. Once you experience one, you'll wonder, with not a little bitterness, why they don't have them in every American bathroom, too.

Japan is so advanced in toilet tech that it's come to pass that its first toilet museum has been dedicated. According to the AFP, electronic plumbing company Toto (yes, like Dorothy's dog, who was also whisked away to a wonderland) opened the museum in the city of Kitakyushu, its hometown in the north of Kyushu island, last week.

The new museum will not only celebrate the considerable advances in the evacuation sciences, but it will also re-create the greatest lavatories it has ever assembled in its nearly 100 years in business. Replicas include ones used by dignitaries at the State House and ones installed in the Hotel New Otani for the Olympics in 1964.

And why not? Museums to everyday objects can be a touring pleasure. Toronto has a shoe museum and Seoul has a kimchee museum, so why not another museum to something we all use every day? Delhi already has its own toilet museum

Lest you're still pooh-poohing the idea, there's this: Admission is free.