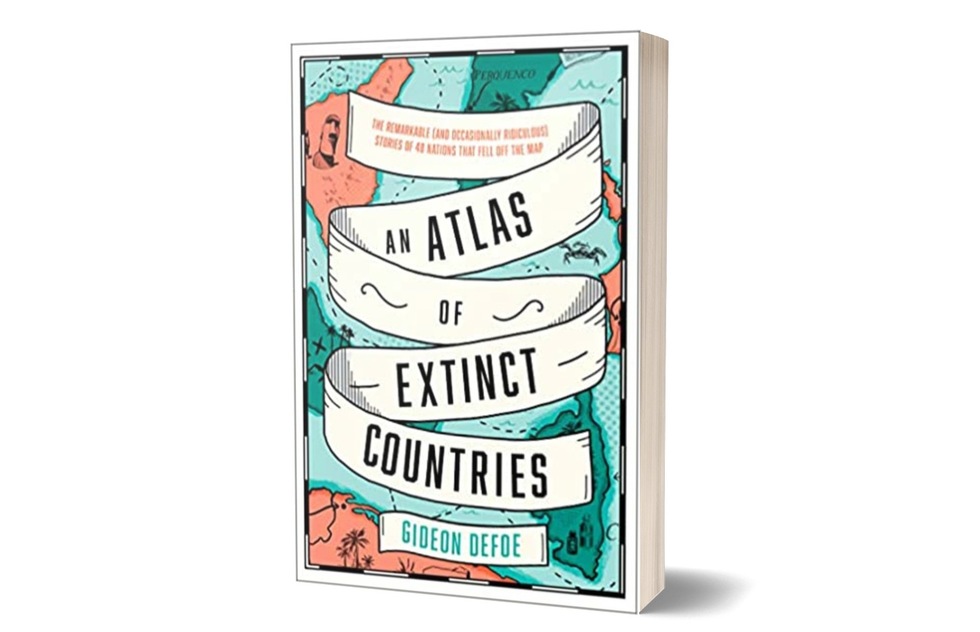 In this time of not being able to travel almost anywhere, one of the most intriguing new travel books is a volume that takes readers to places that no longer exist.

I’m talking about Gideon Defoe’s droll new tome, An Atlas of Extinct Countries: The Remarkable (and occasionally ridiculous) Stories of 48 Nations That Fell Off the Map—a whirlwind tour through the pleasingly oddball tales of history's also-rans. (It's not one of our books, which can be found here. I'm just a fan.)

Atlantis makes no appearance in the book. Defoe instead sticks to countries whose histories are far more provable.

But that doesn’t mean the stories are any less fantastical in the retelling.

There’s the Republic of Cospaia, a tiny chunk of modern-day Italy that gained nationhood by accident. The papacy and the Medicis brokered a deal (as part of the payoff of a debt) that divided the ownership of a large swath of land using a river as a border. But both parties forgot that the river had two tributaries, and so neither side claimed the little town of Cospaia, which lay between them.

The villagers didn’t mind—in fact, they were thrilled to be free of taxes and the threat of conscription. Their tiny idyll thrived for nearly 250 years, from 1480 to 1726, before being subsumed.

Most of the nations profiled weren’t as stable and successful, and that’s part of the charm of reading the book. It makes the reader realize that today’s political dysfunction is the norm rather than the exception.

Consider, for instance, the Republic of Sonora, created by a bounder named William Walker who was able to raise a small army in 1848 seemingly just by harping on the phrase "Manifest Destiny." He marched into Mexico, declared a new “country” in the state of Baja—and was promptly arrested and sent back to the United States. Remarkably, a jury acquitted him of his crimes. And another jury did the same when he later tried to invade Nicaragua.

A similar adventurer named Theodore Stephan Freiherr von Neuhoff became king of Corsica for a short stint, and he was even able to make some major cultural changes there. According to Defoe: "He got rid of the unpopular attacar custom, which dictated that a man who touched or was seen alone with a woman was required to marry her, regardless of either party’s feelings on the matter." Alas, the king's dubious reputation as a nun-seducing, gambling-addicted, "magicotherapist" got out, and he was run off the island.

Defoe has a remarkable ability to bring these idealists, crackpots, and poets to life without belaboring anything. Each of the 48 nations is discussed in three to four pages tops, making this an ideal book to dip in and out of.

And the anecdotes Defoe sprinkles throughout could be fodder for cocktail party conversation for years to come—like the one about the country that tried to stay afloat by issuing stamps or the one about Scottish investors who sank a sum equal to a fifth of their homeland's economy to establish “New Caledonia” in modern-day Panama.

If you’re looking for a delightful stocking stuffer for the travel and history aficionado in your life, look no further.