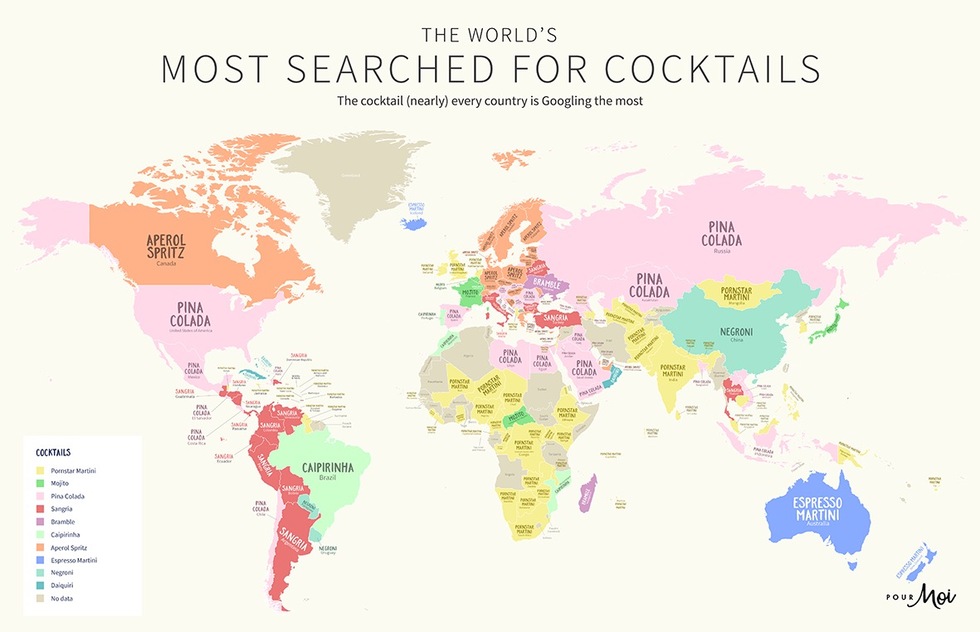 New Analysis Shows Most Popular Cocktails in All 50 U.S. States (and Across the World)

Americans drank a lot at the height of the pandemic.

That's no secret. But what kinds of drinks shifted dramatically, with hard liquor sales growing far more than beer or wine sales, according to a recent Bloomberg examination of the Commerce Department's monthly spending data.

Now a new analysis indicates which cocktails all that hooch was made into, state by state.

A clothing manufacturer called Pour Moi studied Google Keyword Planner data for the last 12 months to determine which types of cocktails were the subject of the most searches.

I think these maps could definitely have a travel application. The results could be used by U.S. road trippers as a guide to what cocktail one should order in every state—if locals are looking up the recipe, well, they may be able to do a better version of it than other mixed drinks.

And knowing which cocktails are popular internationally could give travelers a window into what their tippling should look like when they head abroad.

So what was the winner in the U.S.A.? Get out your paper umbrellas. Turns out that the largest number of Americans like piña coladas (no word on whether they also like getting caught in the rain).

That's the cocktail that got the most searches overall, though it only was the most popular one in seven states. 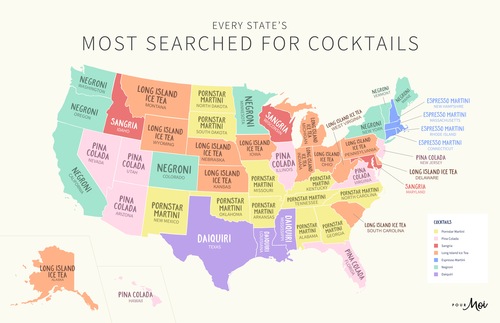 Despite its salacious name, it only involves champagne, vanilla vodka, and passionfruit.

One has to wonder: Do that many people have access to those ingredients? Or are folks looking it up simply because of the raunchy name?

What were the other winners? The knock-you-under-the-table concoction known as Long Island iced tea, which is a deadly mix of vodka, gin, tequila, rum, triple sec and sour mix, was the second-most searched drink in the United States.

Interestingly, it was not the most searched drink in the state that has Long Island. New York went with its Euro-focused compatriots on the West Coast, Vermont, and Maine, picking the bittersweet Italian classic known as the negroni (gin, Campari, vermouth).

Not surprisingly, the Brazilians are interested in searching for caipirinhas. But it was a shocker to see that the Aperol spritz is the most popular European search everywhere but the country it comes from, Italy.

In Italy, they're more interested in sangria, it seems. And who would have guessed that so many Russians were abandoning vodka drinks in favor of piña coladas?

Or that in Australia they like to get peppy and sedated at the same time with espresso martinis?

It's an—excuse the term—intoxicating set of maps, one that shows the growing influence of cocktail culture across the planet. I'll drink to that!