Leave them at home.

Disneyland and Walt Disney World—and Disney parks around the world—have banned selfie sticks. This means that the most popular theme parks on the planet have joined the many institutions that have declared them annoying and dangerous. The world's greatest museums got rid of them months ago (click here for that story).

Last week, a foolish tourist at Disney California Adventure in Anaheim whipped out one of these metal rods while riding a looping roller coaster. You don't have to be a brain surgeon to grasp how lethal that could have been for the people riding nearby. Let's face it: No one wants to see your picture that much.

Selfie sticks are not just risky. They're also rude. But today's news means the distracting scene pictured below, which I captured on Disneyland's Jungle Cruise in May (did this lovely tourist even turn around to enjoy the ride?), is now happily a thing of the past.

If you bring a selfish stick—whoops, I meant selfie stick—to the parks, you'll have to check it at the front gate—which is a lot better than where some people would prefer these self-obsessed grandstanders stick them. 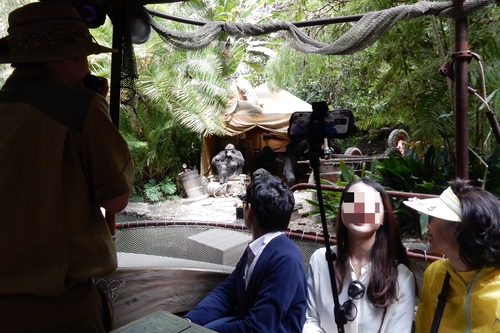