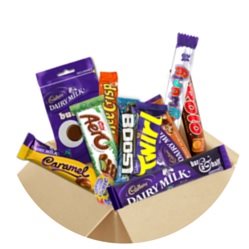 Frommer's readers recently learned, to their considerable horror, that candy maker Hershey's figured out a way to prevent businesses from importing competing British chocolate bars to American consumers, breaking the hearts of anglophiles across America (Read about that ugly truth here.)

Happily, at least one homegrown business has figured out a way around it.

“We were amazed that in our globalized world, and in a freedom-loving nation like the United States of America, a company could just get away with preventing people from physically buying the sweets they want”, says a British man named Robert Jeffreys, who is speaking our language in more ways than one. “We looked into the legalities and it turns out they can't, at least not completely. People who want British chocolate can order it to their doors from outside the U.S. and we want to be the ones getting it to them.”

Jeffreys and his fiancée Rebecca Gerken have started the British Chocolate Club. For $15 a month including shipping, they'll mail you 500 grams (a little over a pound) of real British chocolate bars, including Cadbury, skirting Hershey's bullying tactics by avoiding the store shelves it dominates.

We love anything that keeps Americans enjoying delicious European chocolate instead of the waxen slabs Hershey's churns out. We haven't tried The BCC's service, but it's gratifying to see how obsessed some people can become in pursuit of their favorite food souvenir.

The price seems right, too, considering some importers used to charge more than $3 a bar for a single Whole Nut or Aero. And the pound-a-month allotment, which comes out to about eight bars, might be just the prescription for portion control.

The British Chocolate Club is at www.britishchocolateclub.com.

UPDATE, February 26: Well, Big Chocolate wins again. Lawyers warned Jeffreys and Gerken that they could get sued by Hershey's, so they have already killed the British Chocolate Club and refunded money. At this point, the only way to get British Cadbury's in America will be to smuggle it in, Prohibition-style.