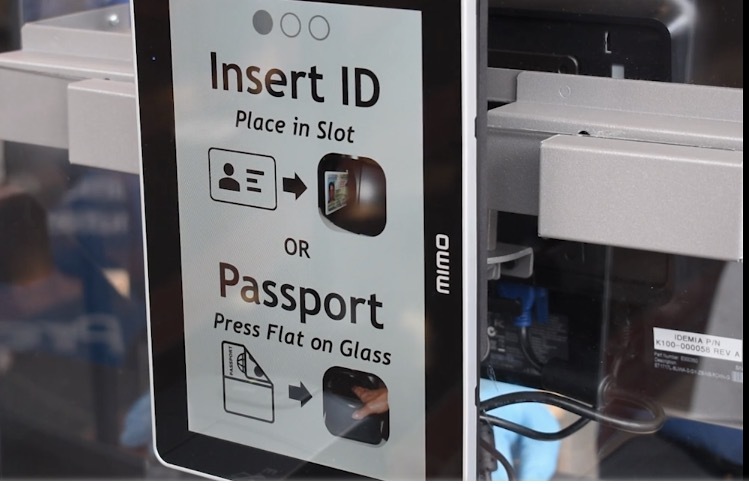 Are TSA Screenings About to Become Self-Serve?

Earlier this week, the Transportation Security Administration (TSA) released information about a pilot program the agency has been testing at Washington, D.C.'s Ronald Reagan Washington National Airport (DCA) to allow passengers to self-screen for at least part of the security process.

New machines will take a snapshot of each passenger, and then match that photo with the one on the traveler's approved form of identification (passport, driver's license, you know the drill). Passengers insert their own IDs into the machines (pictured above) rather than handing the documents to a TSA agent.

The machines then display information about face matching, ID authentication, and flight confirmation in what the TSA is calling "near real time."

The process isn't fully automated, though. Under the new procedure, the photo gets a final check by a TSA agent before the passenger continues to the luggage screening area.

The difference is that with the new system, the passenger's ID is never touched by the agent, thus allowing for greater social distancing. To further minimize contact, the TSA worker is stationed behind an acrylic shield.

Flyers who don't want to have their photos taken have the option of going through the regular process currently in place everywhere else.

In response to privacy concerns, the TSA promises that photos are not being stored by the new machines—in fact, the technology has "no capacity" to save images, according to the TSA's news release.

"The photographs are only used for identity verification to confirm that the photo matches the image on the traveler’s ID and ensure the passenger is the true bearer of an authentic ID," reads the release.

This is the second round of testing for the equipment, following a slightly different tryout in September 2019 at McCarran International Airport (LAS) in Las Vegas.

The coronavirus has provided added incentive for getting the new process rolled out, said TSA Administrator David Pekoske.

"In light of COVID-19, advanced health and safety precautions have become a top priority and part of the new normal for TSA," Pekoske said in a statement. "As a result, we are exploring rapid testing and deployment of this touchless, self-service technology. At the conclusion of the pilot, we expect to be able to determine how positioning the new technology will allow passengers to use it themselves thereby providing a safer checkpoint experience, while adding significant security benefits."

If the pilot program is successful, the TSA plans to introduce the self-service machines at more airports across the country.

Heightening the safety of screening areas would benefit the TSA as much as the public. So far, 1,798 TSA employees have been infected with the virus and 6 have died.

The agency keeps a running tally of infections at each U.S. airport, with dates of when sick agents last interacted with members of the public, at tsa.gov/coronavirus. That page also details safety measures being taken at checkpoints across the United States.

Self-serve document-checking kiosks are already the norm in many airports in Europe and in Canada, where they are often deployed at immigration checkpoints.