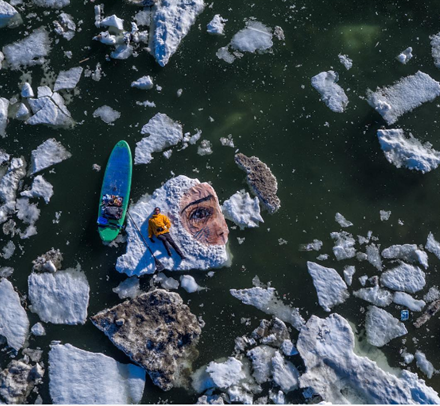 For his latest work, Hawaiian-born artist Sean Yoro traveled to the Canadian Arctic to paint the portrait of a local Inuit girl on a rapidly melting ice floe.

Titled "What if You Fly," the project was documented by photographer and filmmaker Renan Ozturk—whose work will be the only lasting record of the piece, due to the speed with which the ice floes in the region are disappearing.

In fact, Yoro wasn't able to complete the portrait because his canvas ultimately proved too fragile to support his weight.

Beyond the goal of creating something hauntingly beautiful, the artist told CNN that he wanted to raise awareness about climate change.

"I think just visually it's important that people can see how quickly that ice is melting," he says. "You know there's hundreds of articles on climate change, but I want to be that little visual voice that people can actually, hopefully have more of a connection with."