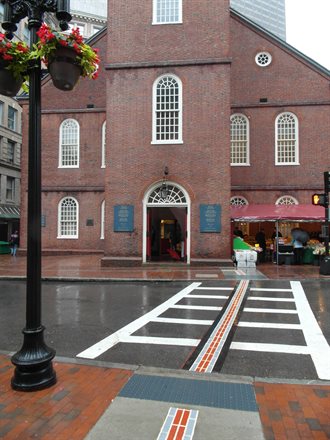 If you have ever tried to follow Boston's Freedom Trail, one of the great city walking tours in America, you might have had some trouble. At times, the faded paint line—which runs 2.5 miles past 16 historic sites in Charlestown, the North End, and downtown—can dwindle into faintness, just like our children's sense of American history it was designed to fortify. If you're trying to use it to locate the landmarks of American independence, you can feel at times like Hiram Bingham trying to track his way through the Andes to locate Machu Picchu.

This year, though, it got an upgrade. Parts of the trail are marked with brick, and those will not change, but many central painted portions, which up to now required frequent touch-ups, are being re-marked with 10-inch-wide multicolored thermoplastic. The new marking strips are designed to last "up to" eight years, according to press materials.

Why they didn't just replace the whole trail with permanent brick is a question worth asking, but proper funding for America's heritage is pretty much a thing of the past itself. The entire project cost $50,000 and is being paid for by the city. It's a smart investment; once upon a time, the Trail attracted some 40,000 people a year.

Just be glad they put down this eye-catching plastic at all, because the Freedom Trail is a tourist attraction worth preserving. It was first laid in the early 1950s, as a testament to freedom in the heat of the Red Scare, and it remains one of the most worthwhile (and affordable) things to do on a visit to Boston.

For a map of the Freedom Trail, visit www.thefreedomtrail.org.