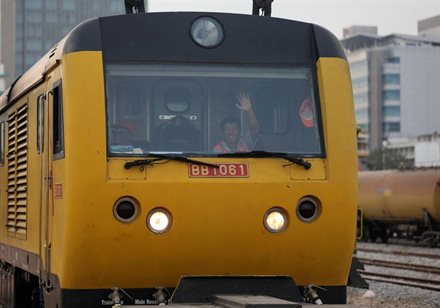 One of the many consequences of Pol Pot's genocidal 1970s regime in Cambodia was the loss of its railway system. The dictator wanted to bring his country back to medieval times, and part of that meant dismantling its railways. Even though tourism has been booming in Cambodia for the past 15 years, visitors are still forced to get around by plane or by tortuous bus or boat routes.

That's finally changing. Long delayed due to flagging funding and poor planning, Cambodia's newly modernized trains are rolling back to life. The first to offer regular passenger service in 14 years goes from the capital, Phnom Penh, to the popular beach city of Sihanoukville.

In the 1990s, in a cruder and dilapidated version, the run was infamous for ambushes from thieves. Today, it's a new source of pride for the country—the prime minister rod the route last month in an effort to draw attention to Cambodia's progress.

Trains can't go very fast yet—the 250km/153-mile run takes 7 hours. They also only go from Friday to Sunday, because the other days are reserved for freight. But it's a new option for touring the country, and an option for seeing villages in the Takeo and Kampot provinces along the way. It's run by Royal Railway, a private company with a 30-year contract, and there are two classes of service: VIP has air-conditioning while standard offers only fans. Right now, tickets are selling out about a week ahead.

And there are still another 350km/217 miles of rails, from Phnom Penh north, that is now undergoing modernization. It's hoped that section through Banteay Meanchey province to Thailand will open by the end of the year.

But that line still wouldn't go to Cambodia's greatest tourist attraction, the temples of Angkor Wat at Siem Reap. Right now, most tourists either fly or take a somewhat arduous river journey. The prime minister responded on Facebook to questions about when a rail line would be constructed to replace those. “It is being studied, and we are looking for funds to build it,” he wrote. “Our imports and exports have been more and more. So, we have to enhance the capacities of the port and the railways.”