Can This 51-Year-Old Cycle Around the World?

On July 24, Scotland resident Peter Smith will set out on from Dumfries on a journey with two goals in mind: To circle the globe and wind up where he started and to smash the Guinness record doing it.

Smith has been a cycling nut for years, having organized charity events in his former job as an HR director. But he's about to apply to his passion to travel and see the whole world by the force of the pedals under his feet.

Working since last year, Smith has prepared everything from his nutrition to his endurance—on British roads, he trained himself to be able to cycle 200 miles in a single day.

He's also been savvy about recruiting sponsors. Famed British mapmaker and bookstore Stanfords is one, GPS device manufacturer Garmin is another, and the support has enabled him to assemble a traveling team so he won't have to risk this alone. He'll have a cook/driver/masseur, a photographer, and a social media manager, all of whom are substantially younger than he is and who will document his epic journey for us armchair travelers following it back home. When he meets an ocean, he'll leap it by plane but start again on the coast of the new land.

He's not sure how long it will take, but the goal is to do it in under 100 days. If he succeeds, he'll be the oldest person ever to have done it. 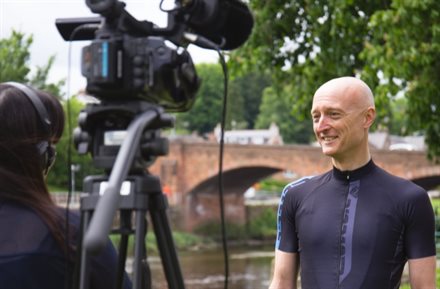