#CarryOnShame Campaign Exposes Bag Hogs on U.S. Airlines: Are You Next? 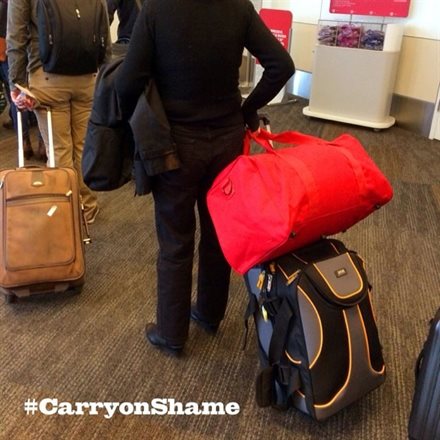 When Spud Hilton, Travel Editor of the San Francisco Chronicle wrote about carry-on bag hogs on the paper’s travel blog, Bad Latitude, this week, he had no idea that the response would be a tidal wave that flooded his in box with affirmations that the “carry-on bag hog” is now considered one of the lowest forms of traveling humanity—right next to the kid kicking the back of your seat and the armrest thief.

Hilton says the tsunami of media attention his blog, “Time to smack down carry-on offenders” received took him completely by surprise.  Both Good Morning America and The Today Show highlighted Hilton’s campaign to shame the stuffers by posting users’ images of offending bags and other take-ons, along with the social media hashtags of the airlines that fly them.

Hilton was deluged with a groundswell of media that illustrates the rage of flyers who follow the rules for those who do not.

“Since checked bag fees arrived there has been an increasing level of frustration with people who try to skirt the fees by bringing on steamer trunks,” Hilton says.

“Everyone was ticked about it. The airlines also weren’t enforcing their carry-on policies. You have a lot of random anger out there and this was a way for people to channel their anger.”

Hilton explains that when you see images taken of offenders by their fellow flyers on his blog every week (he is going to pick and post the best from the barrage of examples the blog is getting) the goal is not to shame passengers.

"We are trying to call attention to the fact that airlines aren’t enforcing their own policies," he says.

“It’s not just the self-absorbed, entitled passengers who are trying to get around the rules or save a buck. This is a three pronged problem: passengers bringing on the stuffed carry-ons, airlines not enforcing the rules, and bag companies fudging on the dimensions of their bags.”

Hilton explains that many bag companies “are selling big bags and no one holds them accountable.  No one has ever bothered to write a story about carry-on bags that are the wrong size.  Forty percent of the examples that I’ve come across were not the size they said they were.”

The bag companies are selling bigger bags than allowed in flight because they look better, passengers are buying and stuffing them even larger and finally, airlines aren’t enforcing their dimension policies.

“Airlines know passengers are already mad at all the new fees and restrictions and they don’t want to irritate them further by enforcing carry-on rules,” he says.

Passenger anger notwithstanding, Hilton says that free bag check is never coming back.

“Companies raise their prices.  It happens.  People have to get over it. This one is a scapegoat for people to rationalize behaving badly.

“What we are trying to do is to make travel more about giving a crap about the guy next to you.  Travel has become such a traumatic cattle drive of a situation. Everyone decides to become insular, not care about anyone else than other than themselves.  We should be helping each other, not cheating each other.”

Hilton wants passengers to “do this one thing.  Do one nice thing for someone on your next flight.  Put their bag in an overhead bin.  Help a mother with a baby.  Spend a little less time thinking about yourself and more about the other guy.  Then flying will be better for everyone.”

If you’re fired up about carry-on hogs and stuffers, follow Spud’s campaign weekly on his blog and join in the Twitter feed @spudhilton.

Gretchen Kelly writes about travel, media and the ways the two connect and collide at TravelHushHush.com.  Follow her @TravelHushHush.