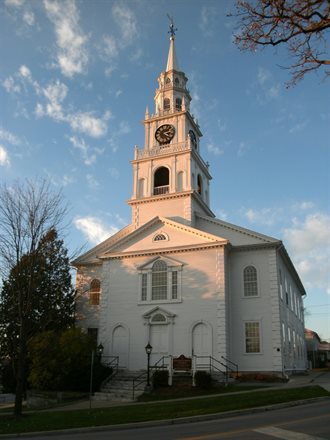 To my left is a sign for a shop selling maple syrup. Over my right shoulder is the town green, looking as New England as New England can be. But passing me are, first, a whole swarm of eager young things chatting away in French. And then, a couple, one half of which has blond hair and blue eyes, having an intense discussion in what sounds like Chinese.

And probably is Chinese because I’m in Middlebury, Vermont an idyllic, Norman Rockwell-esque town that has at its beating heart the best language learning center in the United States, Middlebury College. Which means that vacationing here, one gets the best of, well, many worlds.

You don’t have to ante up and take a course to get that experience. Middlebury College has, most weeks of the year, dozens of events that are open to the public and can, in an instant, transport you to another land. On the weekend I was in town, they were screening a German film that never was distributed in North America. I stayed until, mysteriously, the subtitles disappeared halfway through. Luckily, a Japanese festival was happening at the same time, so I popped over there to sample mochi (a sticky candy) and watch traditional Japanese folk dancing. The next day, I attended a carillon bell concert with a visiting Dutch musician, visited the college gallery to see works of art from the Weimar period in Germany (by such big names as Otto Dix or George Grosz) and eavesdropped on conversations I couldn’t understand a whit.

I also gloried in the town of Middlebury itself, which offers up the very best of Vermont. At the American Flatbread Company, I was served by a staff that looked like it was about to head out hiking, eating delicious pizza perfectly seared in a home-made, beehive stove. (Above it were the words “Food Remembers!”. I have no idea what that means, but it spoke to the wonderfully hippie dippy ethos of the town).

After lunch I headed over to the Vermont Folklife Center, a historic home that went beyond showcasing handmade quilts. It featured, oddly enough, a compelling photo and video exhibit about the competitive wrestling tournaments (complete with “good guys” and masked “bad guys”) that are taking place in other small Vermont towns. That temporary exhibit will be in place until October 4.

Nearby was the town’s other museum, a historic home called the Henry Sheldon Museum. It was, as you’d expect, filled with fine antiques, ancient prints and text about what Victorian life was like for the Sheldon family. But whimsy reared its head here, too (displaying Victorian clothing were figures with giant deer, fox and duck heads). The temporary display (on through the fall) was an erudite, and surprisingly compelling exhibition on classic New England gardens. I’m a native New Yorker, so not usually interested in gardening, but the wall text was so well-done and the prints so beautiful, I found myself being drawn in to the story of how the settlers in this area went from basing their landscapes on British models to ones that better reflected the horticulture of New England.

And yes, I purchased a jug of maple syrup before I headed home. I believe it’s illegal for outsiders to leave the state without one.

Middlebury College: You can find information on what programs are open to the public at www.middleburycollege.edu