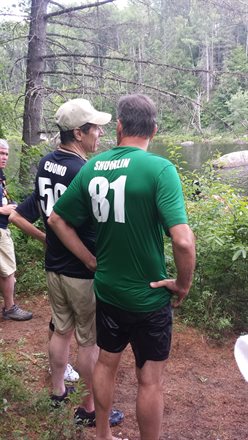 New York State Governor Andrew Cuomo may be hobbled by scandal in the corridors of power but on Indian Lake in the Adirondacks it was smooth sailing this past weekend.

The Governor, Vermont counterpart Peter Shumlin and Cuomo's gal pal, Food Network's Sandra Lee kicked off the Adirondack Challenge, a three-mile white water rafting course on the pristine North Country lake. Teams included state legislators, city mayors, econonic development staffers and yours truly in a media boat that was splashed (all in good fun, of course) by the politicos at the start of the great race.

After the rafting challenge Cuomo told the media that New York is betting "very big on tourism, especially for upstate New York." Cuomo said that the state's $40 million investment has increased tourism revenue by $4 billion.

"We just broke a new record," crowed Cuomo. "We have 8 million new tourists who have come to New York today, More than ever before. We’ve broken every record that we’ve ever established and that is just the beginning."

After his speech, VIPs dined on local barbeque food from the Taste New York pantheon of local providers and Cuomo promised to come back next year with even stronger paddling chops to break the "tie" that was proclaimed between New York and Vermont's outward bound Governors.