For many airline passengers, an oversold flight creates anxiety over the potential for delays, a hectic boarding process, or even—worst-case scenario—getting bumped to a later departure time.

But where some see uncertainty, others see opportunity. Passengers with flexible schedules who are willing to give up their seats for later flights are sometimes offered hundreds of dollars in vouchers to spend during their extra time at the airport.

Though all airlines oversell seats, your chances of getting compensated for volunteering are greater on some carriers than others, according to a new study.

Milecards.com crunched recently released 2016 Department of Transportation data ranking major airlines on how often they pay volunteers to give up confirmed seats on oversold flights.

The results show that on average, across all airlines, 6.6 of every 10,000 passengers became volunteers for compensation—either for flying later or not flying at all. 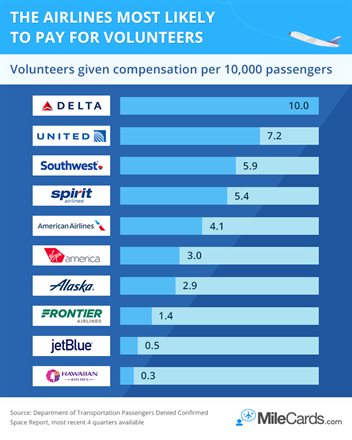 Besides being the most frequent to offer compensation to volunteers, Delta is often generous in what it gives, doling out vouchers and gift cards—sometimes valued as high as $800—that can be used anywhere. Delta occasionally engages in reverse auction bids at the gate, too.

Least likely to pay volunteers are JetBlue and Hawaiian. But that has less to do with stinginess than those airlines’ tendency not to overbook flights.

Most likely to bump passengers are regional airlines, which have smaller aircraft and therefore fuller flights. Last year 14.7 of every 10,000 passengers on those carriers volunteered their seats in exchange for compensation.

The study also shows a decline in involuntary bumping since 2010. There has been less need for it as airlines have improved methods of accurately forecasting demand.