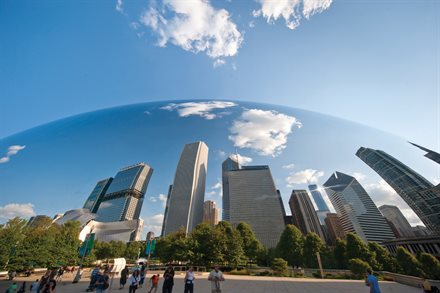 Chicago has always been an iconic city in American movies.  From ‘30s gangster films to John Hughes’ feel good teen flicks like Home Alone and Risky Business in the 1980s, Chicago has loomed large in our collective movie-going consciousness since films began.  The newest movie to frame Chicago’s status as the quintessential American town is Divergent--the new future imperfect film of Veronica Roth’s bestselling dystopic trilogy.

Fans of the books, who know that the author lived in Chicago when she wrote the books as a student at Northwestern University, have already been visiting sites connected with the story of Tris Prior the “Dauntless” rebel heroine (played in the film by newcomer Shailene Woodley).  But director Neil Burger’s first film of a planned movie trilogy has initiated a whole new “faction” of film-goers who want to see Chicago from Divergent’s unique POV.

Although Divergent tours won’t be on Chicago Film Tour’s running commentary of over 80 movies shown on the two hour bus tour until the DVD premieres sometime later this year, the company’s  founder John Brinkman  says that their existing tour goes by many of the sites seen in the film: Navy Pier with its huge Ferris Wheel, Lower Wacker Drive, Millennium Park, the Willis and Wrigley Buildings (the Willis Tower was formerly known as the Sears Tower) and numerous sites where you can see Chicago’s L train, which looms large in Divergent’s “Dauntless” faction warrior training sequences.

“So few cities have a structure like the L Train,” says Rich Moskal, Director of the Chicago Film Office.  Moskal says that “movie makers love to play with the L because it makes noise and is like a life-sized toy train set running through the city.”

Moskal says that although the film producers used their own version of trains you could jump on and off of for the actual movie, they shot the real L and its stations at many places along the line.

For Moskal, “Riding the L and walking through the architectural showplace of the city’s skyscraper canyons is the best way to connect with the Divergent view of the current (and future) city of Chicago.”

Chicago Film Tours offers a 2-hour movie tour of the city which goes by all the major sites connected with Divergent (although commentary won’t be available until later this year).  The tour is $30 per person and meets at 600 North Clark Street in Downtown Chicago.  Travelers are advised to book online in advance first. ChooseChicago.com has more info on sites, tours and Divergent-related travel.

Photo: Chicago Reflected in the Cloud Gate (The Bean) at Millennium Park, photo Courtesy of ChooseChicago.com