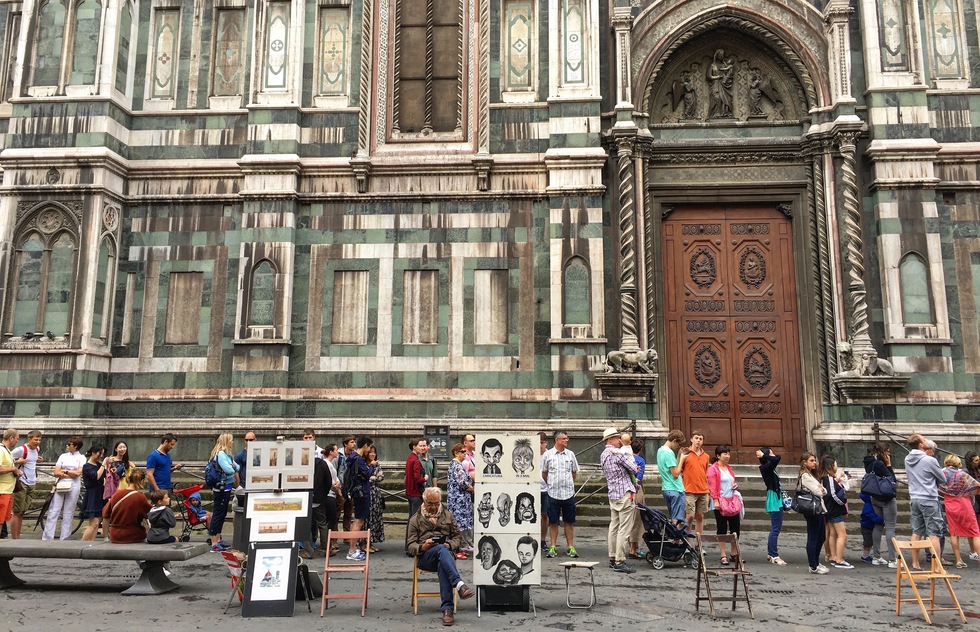 Eat on Florence's Streets and You Could Be Fined $580

Lots of people choose to visit Italy because they respect the cuisine, but now, eating it with dignity is the law.

On September 4, Florence instituted a new penalty for tourists who are caught loitering as they eat.

On the narrow lanes of central Florence, local shopkeepers are fed up with visitors who linger in doorways and on stairwells to have a snack.

The biggest complaint, it seems, was that some messy tourists tend to leave behind greasy wrappings and discarded packaging, which the city then has to clean up. But rather than penalize the infraction of littering, the decision was made to go after the traveler's habit of eating outdoors and on their feet.

There are few benches around the narrow historic streets of Florence, and many gelato and panini shops are so tiny they offer no seating, so the effect will be to force on-the-go visitors to seek tables indoors, perhaps at more expensive cafés and restaurants.

The city is testing the rules for four months between the hours of noon and 3pm and 6 and 10 pm, Thursday to Sunday, on four lanes clustered near the world-famous Uffizi Gallery: Via de' Neri, Via della Ninna, Piazzale degli Uffizi, and Piazza del Grano. Breach Florence's new demands for decorum and you could be fined between €150 and €500 (US$174 to US$580).

"Tourists, if they behave like they do at home, are and will always be our welcome guests, especially if they want to enjoy our gastronomic specialities," wrote the mayor in a (translated) Facebook post. (Apparently he has never ridden the New York City subway, where it's customary for natives to nauseate their fellow passengers with steaming platters of take-out Buffalo chicken wings or slabs of oozing pizza.)

What's not being said is that in Florence, an estimated 20% of apartments have now been converted into vacation rentals on Airbnb and similar sites. As in many other European cities, the resulting housing crunch has engendered deep bitterness toward tourists—a resentment that's now being expressed in rules that essentially penalize their very existence. In some popular European cities, tourists are increasingly viewed—and treated—as pests.

Last year, locals began turning hoses on cathedral steps to discourage visitors from congregating on them. The same mayor was behind that.