Economizing, Six Flags in New Jersey To Create World's Tallest Drop Out of an Existing Ride

Six Flags has blazed an admirable path. Many observers were concerned that the amusement park chain would have a hard time getting back on top after emerging from bankruptcy, particularly given the public's appetite for a new big-ticket ride each year. But it has devised clever ways to economically satisfy America's hunger for big projects.

Great Adventure, a Six Flags park midway between New York City and Philadelphia, will create the world's tallest drop ride by simply affixing it to the structure of an a 45-story-tall roller coaster, Kingda Ka.

The new ride, Zumanjaro: Drop of Doom, will raise benches 415 up, twice the height of the Statue of Liberty, before letting them drop at 90 mph.

The space- and budget-saving tactic was previously employed by Six Flags Magic Mountain in Southern California, which in 2012 affixed Lex Luthor: Drop of Doom to the existing Superman: Escape from Krypton structure.

The new addition comes at a cost: Rolling Thunder, a dual-track 1979 wooden coaster, will be dismantled. Fans have just a week left to ride it; the last day for it is Sept. 8, 2013. 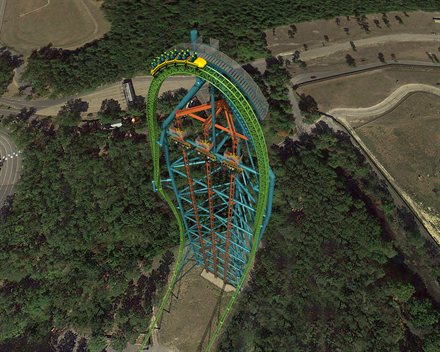