Paris' Eiffel Tower unveiled its new $37.5 million renovation today, which rehabilitated its somewhat ignored first level by adding shops, places to eat, and a museum that tells the story of the icon.

But the most buzzworthy addition appears to be a new glass floor that allows visitors to stand on clear panels 187 feet above the ground below.

After it was opened in 1889, Parisians hated the Tour Eiffel. One year, scarcely 121,000 people bothered to go to it. But today, it's one of the most popular tourist attractions in the world. In 2013, 6.74 million ascended.

The 1,023-foot-tall Eiffel Tower may be the grande dame of observation towers, but it's hardly the first to install one of these goosebumps-inducing gimmick floors. In Toronto, the CN Tower has had smaller patches of such panels for over a decade, and in Chicago, both the Willis Tower (Skydeck Chicago) and top of he John Hancock Tower (360 Chicago).

For Frommer's full coverage of the Eiffel Tower, click here.

The first visitors are already visiting and tweeting the thrills. Here's one that just came in: 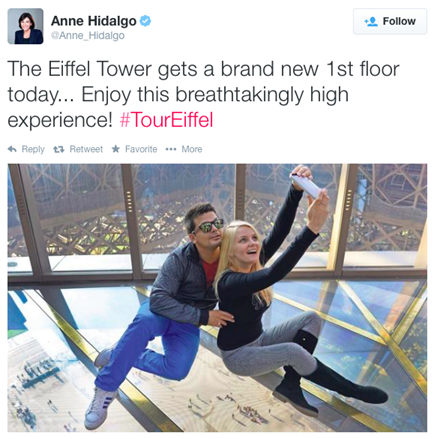