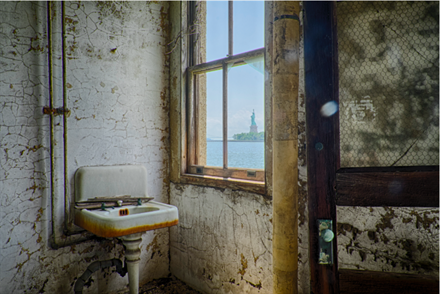 After years of begging from Americana buffs and urban explorers, the spooky and historically crucial Hospital Complex of New York harbor's Ellis Island is now open for guided tours after years of decay and abandonment.

Most people identify Ellis Island with its regal Main Building, through which some 12 million immigrants passed in the six decades it served as New York City's principal arrivals hall. There, immigrants with questionable good health were marked with chalk and detained for treatment. That central hall was restored to great acclaim and success in the 1980s and has been a powerful tourist draw ever since. But there wasn't enough money to restore the campus of buildings on the other side of Ellis Islands' boat slip, where immigrants who were not permitted to land were housed and inspected until their health improved or they were sent back home again.

The so-called Hospital Wing still isn't restored—America still hasn't put adequate resources into preserving it properly—so the tours require a hard hat. But the dilapidated areas you'll see are wrenching indeed—faded paint, weather-warped doors, dusty floor boards, and the leftovers from the days when terrified immigrants, many of who were destitute, spoke no English, and never seen a doctor before, were brought here and cared for by nurses while their fates were determined. The news wasn't always bad for the residents here; it was in these rooms that 355 babies were born.

The Hard Had Tour is sold by Statue Cruises (877/523-9849, statuecruises.com), the island's official operator, and includes 90 minutes on the South Side of Ellis Island, where the hospital wings are. Adults cost $42 and seniors over age 61 are $39 and the price also includes time on Liberty Island (for the Statue of Liberty) and the main areas of Ellis Island, plus boat transportation to both from the tip of Manhattan or New Jersey's Liberty State Park.

Tickets are currently sold out through December, so plan ahead. For our solid, time-tested advance planning guidance, Frommer's brand new 2015 edition of our New York City guidebook is now on sale.

This quick video from the History Channel gives a peek at what you'll see on the newly opened tour: