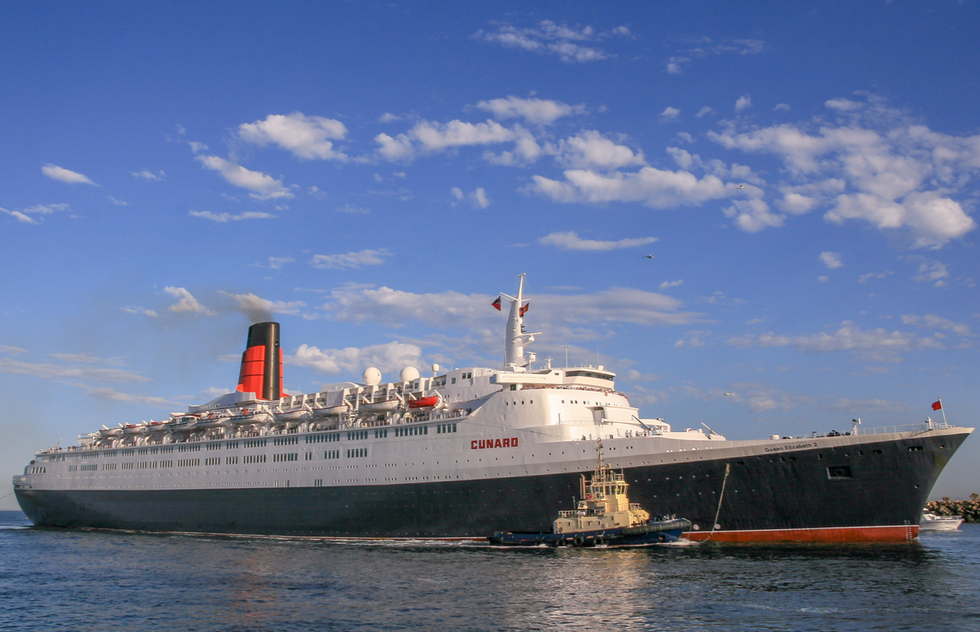 During its 40 years in service starting in 1968, Cunard's Queen Elizabeth 2 ocean liner sailed a total of nearly 6 million miles, stopping at 312 ports around the world and crossing the Atlantic Ocean 805 times.

Now permanently docked in Dubai, the QE2, as it's commonly known, has been transformed into a 13-deck, 215-room floating hotel in the city's Port Rashid district.

But you don't have to go to the United Arab Emirates to delve into the ship's storied past, thanks to an absorbing online project created by a former captain of the QE2 and his son.

According to The Telegraph, Commodore Ron Warwick, who captained the vessel from 1990 to 2003, and his son, Sam, an IT consultant and author, have worked for more than two decades to log every single one of the QE2's voyages, from the sea trials in 1968—when Ron's father, William, served as the ship's first captain—to the farewell cruise around the world in 2008 (the ship's approach to Fremantle, Australia, during that trip is pictured above).

The result of the Warwicks' painstaking labor is the QE2 Abstract Log, an exhaustive record of the ship's 232,129.02 hours at sea.

The data, compiled from more than 16,000 entries in log books as well as captains' diaries, public records, and documents from the Cunard Archive at the University of Liverpool, is estimated to be at least 99.5% accurate, according to the website.

The info is interactive, too. You can search for specific voyages—perhaps to jog your memory with the details of a past vacation—or scroll through annual reports detailing how far the ship sailed, where it went, and what happened on board for each year the QE2 was active.

The list of notable events at the end of each annual report is perhaps the site's most fascinating feature, especially given the terse, matter-of-fact way that strange incidents, A-list passengers, and even big geopolitical conflicts are notated.

Site users can also peruse stats about the ship's 25 captains and the most-visited ports. If you have additional details to share about the QE2, you're invited to submit info via the website's contact page.

Cunard, for its part, still offers transatlantic journeys aboard the Queen Mary 2, which travels between New York City and Southampton in the U.K.—though New York service is temporarily disrupted due to the Omicron surge.

To experience the Queen Mary 2 virtually, you can watch Steven Soderbergh's Let Them All Talk on HBO Max. Much of the film, which stars Meryl Streep as a famous author on a trip with lifelong friends, was shot on board the ship during a regular transatlantic voyage in 2019.

Then, of course, there's the original Queen Mary. Put out of commission in 1967, it was turned into a tourist attraction and later a hotel in Long Beach, California, but access to the moldering vessel is currently barred to the public as city officials try to figure out how to come up with the millions of dollars needed for repairs.