Drive for 26 miles in Florida and what will you see? If you’re by the shore, the vistas will likely be a daisy chain of beaches, hotels and strip malls. Especially strip malls. Sometimes it feels like Florida has more of those than any other U.S. state.

But not in South Walton, a community on the Gulf of Mexico that comes to an end right before the state starts to dangle towards the Caribbean. The powers-that-be along this 26-mile corridor came to the tourism game slightly later than those in Atlantic Florida did. A blessing, it turns out, as they saw first-hand the dangers of haphazard development.

Instead, they planned everything down to a T…and left alone the gifts that nature had provided. Chain stores and restaurants were banned in South Walton (ok, one Subway sandwich shop slipped in recently, but that caused a huge hubbub) and instead of allowing construction right at the edge of the beach, each of the 16 communities was set well enough back to allow the dunes to do their job of protecting the shoreline.

And what a shoreline it is! The sand is pure quartz, so from afar it looks like snow has fallen among the dune grasses. Some 40% of the land is protected against development, and that includes a rare collection of coastal dune lakes, the likes of which can only be found in Madagascar, Australia, Oregon and New Zealand. The short bio-explanation: these are brackish lakes, meaning that they’re a mix of fresh and salt water, that are replenished by streams and storm surges.  But for tourists, these glassy, lily-pad laden bodies of water are swell paddling places for kayakers and those into stand-up paddleboarding. They’re also gorgeous (one is pictured in this piece). 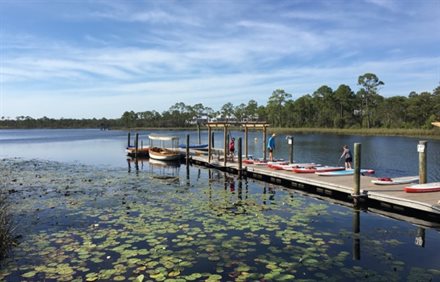 But South Walton’s lures aren’t just natural—its 13 towns were built to charm, and they do, each in their unique way. The most famous is Seaside, which served as the set for the 1998 classic film “The Truman Show” and is one of the most famous communities developed as part of the “New Urbanism” movement. Under those principals, its houses are all built quite close together and without private lawns, so that the town is walkable, environmentally sustainable and gives a real sense of community. Pedestrian-only pathways lace the town, along with regular streets, all of which radiate off a shop-laden central square, which houses half-a-dozen airstream trailers selling all kinds of foods. And for visual impact, the houses are built in a myriad of styles—Victorian, Modern, PostModern, Neo-Classical.

Seaside is a hoot to explore, but so are South Walton’s other towns from the very Tudor Rosemary Beach to the Moroccan-looking Alys to Watercolor, a neighborhood in which all of the houses are painted in the colors Monet tended to favor. Driving from one to the next feels like you’re taking a whirlwind tour of world architecture. Not surprisingly a number of artists have been drawn to the area and set up flourishing galleries.

Alas, none of this comes cheap. Rent a beach chair and an umbrella on a beach and you could be ponying up $50 a day for the privilege. There are more beds in rental homes than hotels in this area, and most that would be attractive to a family of four go for the upper $300’s per night, in the high summer season (prices do dip in balmy April, May, September and October). That being said, you can spend less, and there are a few inexpensive motels in the area, if not right next to the beach.

For More Information: The state tourism board has helpful tips, maps and more at Visit South Walton.