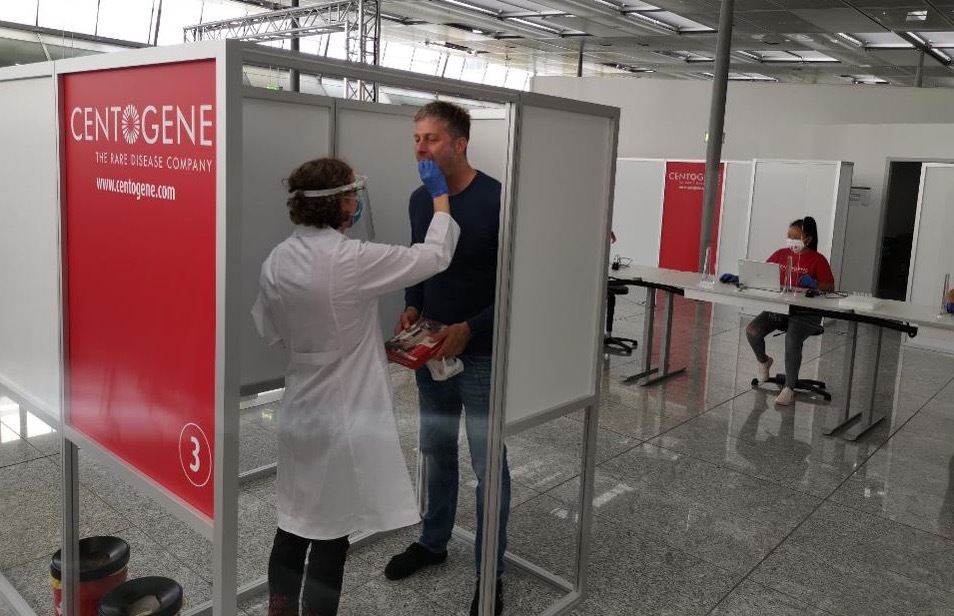 We'd rather have a Cinnabon, but in a move that could serve as a model for air travel around the world, airports in Frankfurt and Munich have opened onsite Covid-19 testing labs.

The labs, which conduct RT-PCR tests (Reverse Transcription Polymerase Chain Reaction tests) via throat swab, may be used by both arriving and departing passengers. Results from tests conducted in the morning are usually available within the same day. Since the results are linked to the passenger's ticket, they could be used to get around quarantine in countries that accept recent tests in lieu of self-isolation.

Business Traveller reports the venture is a partnership between German airline Lufthansa and Centogene, a lab certified to conduct the tests in Germany and Austria, where many visitors face a 14-day quarantine if they don't have proof of a recent test. So for now, passengers are using the airport labs to travel freely on Lufthansa to and from those two countries.

Americans are not currently allowed to fly to Germany unless they already reside in the European Union or fit several other narrow qualifications that exclude tourism. But if the new testing system proves workable, there's no reason it couldn't be accepted by more carriers and more countries, which would in turn loosen travel restrictions.

In Frankfurt, the lab is located near the airport's long-distance train station. In Munich, the lab is in the airport's medical clinic. In both cases, the sampling center is situated outside the security zone.

Using the airport labs still requires some advance planning. In many cases, sampling will need to happen the day before outbound travel. Passengers must register ahead of time for tests using the Centogene web portal, and tests aren't free—they cost €59 (US $66) to get results in six to eight hours, or €139 (US $156) to speed that up to three hours. If a sample is taken after 3pm, the result won't be available until around lunchtime the next day.

We're keeping an eye on this experiment. If more airports could provide rapid coronavirus testing as part of their standard services, the wheels of international travel might finally be able to grind into motion again.