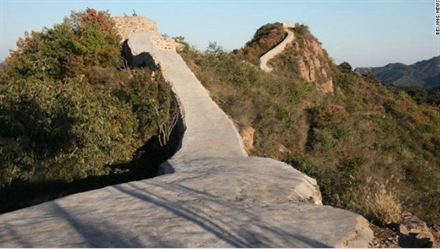 An effort to restore a 700-year-old portion of the Great Wall of China has sparked outrage on social media after photos of the project were posted online.

In the country's northeastern Liaoning province, workers have covered the 8-kilometer (5-mile) Xiaohekou stretch of the wall in concrete, replacing crumbling steps and plant overgrowth with a smooth walkway that has all the visual charm of a highway overpass.

Numerous people in China expressed shock and dismay over images of the restoration. "Such brutal treatment of the monuments left behind by our ancestors!" lamented one user of the Twitter-esque Weibo service. "Why don't we just raze the Forbidden City in Beijing, too?"

Even the deputy director of Liaoning's departmet of culture called the repairs "quite ugly."

Maitenance of Xiaohekou, which was built in 1381 during the Ming Dynasty, was ordered in 2012 after the site had grown severely dilapidated—a concern along much of the Great Wall. In fact, estimates of the structure's total length vary from 9,000 to 21,000 kilometers (6,000 to 13,000 miles), depending on whether you count the parts with missing pieces.

Ideally, however, restoring the wall wouldn't involve erasing what makes it distinctive.

China's State Administration of Cultural Heritage says it has launched an investigation into how the Xiaohekou maintenance work was carried out.