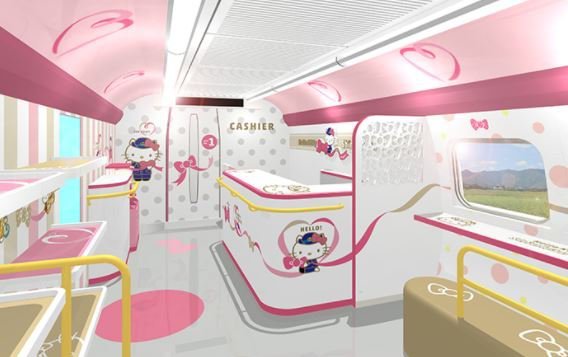 On June 30, 2018, a brand-new bullet shinkansen service will make its debut in Japan: a Hello Kitty train.

The Hello Kitty Express, as we're calling it, will link Osaka and Fukuoka, two cities that are about 400km (250 miles) apart, but as of today, are at the center of our hearts.

Everything will be pinker than a debutante, washed in the blush tones of Japan's favorite mouthless cartoon character, and when the train pulls into a station, her theme jingle plays. There will be one car (called Hello! Plaza!, because of course) where passengers can buy souvenirs and check out a miniature exhibition, plus another carriage with a Hello Kitty-themed photo booth—because if you ride a train like this and you don't Instagram it, did you ride it at all?

The themed service brings Japan's obsession with kawaii (cute) culture to speeds of 200 miles per hour, which may have some guests feeling grateful they're not stuck on the slow train.

But don't make the mistake of thinking this is groundbreaking. The idea replaces a service themed to the anime TV show Neon Genesis Evangelion. That train was such a smash that its tenure was extended by more than a year, but it made its final run last week. Given the decades-long popularity of Hello Kitty, her train may prove to have nine lives.