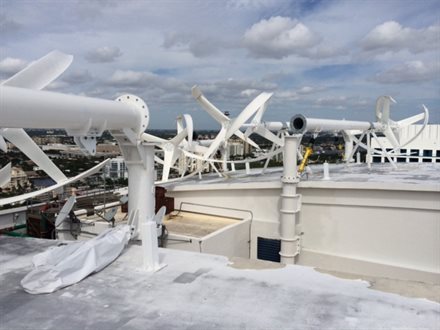 On top of the 26th floor of the Hilton Fort Lauderdale Beach Resort, barely visible from A1A and the beach on its doorstep, six wind turbines have just been installed.

I checked them out on a recent visit to the city. For now, they bow down like modernist sculpture, held horizontal by their hydraulic lifts, but this month, they will be unfurled to a height of 35 feet above the roof line and their pinwheel-like blades will capture Atlantic Ocean breezes and funnel the energy to the 374-suite hotel’s power grid.

It seems like an obvious idea for a beach resort to harness sea breezes to knock down the electric bill, yet no other Hilton has them, and you'd be hard pressed to think of any other hotel that has them, either. In 2011, the site GreenLodgingNews.com estimated that only 15 properties in the United States used wind turbines are part of their consumption profile.

The energy generated may appeal to guests’ sense of virtue but is unlikely to discount their bills anytime soon. The hotel’s Director of Operations, Tamas Vago, says it will be years before the turbines, which cost about $100,000 each to install and have the support of the community, pay for themselves.

But for now, the six of them are expected to provide enough power to run the hotel’s lights. If they work well, the hotel will install three more atop the resort's porte-cochère. There are also plans to add solar panels (another no-brainer for a Florida rooftop) and a food composter.

Hilton didn’t commission the turbines—it manages the property but does not own it—but the corporation is keeping an eye on the financial results.

If they’re a success, and if they are truly as silent in operation as they are in dormancy, Hilton will have the option of implementing them at hundreds of properties where they make sense.

“Energy is not only an enormous cost to the business, but it is also critical to every part of the hotel and guest experience,” said Randy Gaines, Vice President of Engineering, Housekeeping and Laundry Operations, Americas for Hilton Worldwide.

Gaines said that within five years, Hilton plans to reduce energy consumption, carbon, and waste output by a fifth and water use by 10 percent. The company says it has saved about $253 million since 2009 by economizing the use of resources.

Mindful consumption of resources is a trend worth encouraging, and in Fort Lauderdale's case, the turbines will make for a buzzy new landmark on the beach. Whether that savings is passed to consumers will be up to the chain. 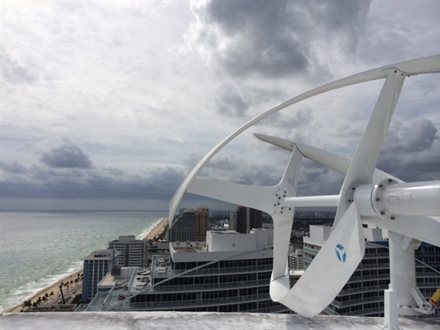