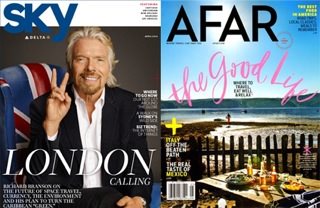 The future of the physical, non-virtual travel magazine is on travelers’ talking lists lately.  The recent shake-ups at Condé Nast Traveler and its subsequent high profile relaunch has spurred debate—is the travel magazine in its old school glossy, print format dead?

The Editors of Delta Sky and Afar magazines don’t think so. Not by a long shot.

Last week, Delta’s in-flight Sky magazine announced a newly rebranded version—dovetailed to the airline’s alliance with Virgin Atlantic and featuring a beaming Sir Richard Branson on its cover. Also announced last week was the nomination of the much-loved Afar magazine as a finalist in General Excellence for the 2014 National Magazine Award (the only travel pub on the list).

“Are we going to do away with physical magazines? What is going to happen?  People have been asking this question but here we are and magazines are still going strong. People are still picking them up and reading them,” she says.

“We’ve done our research, we’ve captured people,” she says.  These readers will now be getting a cleaner design and more focus on experiential narrative travel features that make readers want to get up and go somewhere along with business travel and lifestyle features, all of which dovetail with the magazine’s digital version.  But Haugen Olson is quick to point out that the paper version is “more laid back” than what you consume in the “smaller, noisier” digital universe.

“We wanted it to feel more like a real travel magazine,” she explains. But although the print edition is going strong, Haugen Olson says that she is looking into ways to expand the connections between the magazine and passengers’ mobile apps and digital devices.

“On the seat-back screens now you can make reservations with Open Table and other strategic partners,” she says. “You can’t do this yet from an iPad app but in the future you could be reading the magazine and booking reservations as you go. Delta wants to connect all the dots for the passenger.”

Julia Cosgrove, Vice President and Editor-in-Chief of Afar, says “people have been forecasting the death of the print magazine for a long time.”

For Afar, however, a print magazine “was the most effective way to put the stake in the ground about who we are and what we wanted to do.”

“I see my own spikes on Saturday when I get Tweets that say, ‘I’ve just spent the most wonderful relaxing day reading Afar.’ You put the phone and computer away, and just get lost in a beautifully produced well-written physical magazine. There is no substitute for that. Reading magazines on the iPad is not the same,” she explains.

“When we launched in 2009 we felt that, especially in the online space, everything was very transactional and there wasn’t a lot of inspiration. For print magazines, everything was escapist. There was no travel media brand that was speaking directly to travelers looking for inspiration—for a deeper, richer experience.”

Cosgrove says that Afar’s brand identity is encapsulated in the fact that you will never, ever see them doing a cover of a model on an elephant on a beach. “This is a formula that works for other publications, but it would not work for us and our readers,” she says.  Afar’s brand identity is not about status or celebrities, she says, it is about the shared love of the journey.

"In the midst of all the mediocre fare that is out there—the curse of the web—our audience really values high quality storytelling," she says. "We hear it from them constantly.  It has even more of a place in today’s very noisy online world.”

Read more about travel and media on Gretchen Kelly's TravelHushHush.com and follow her @travelhushhush.