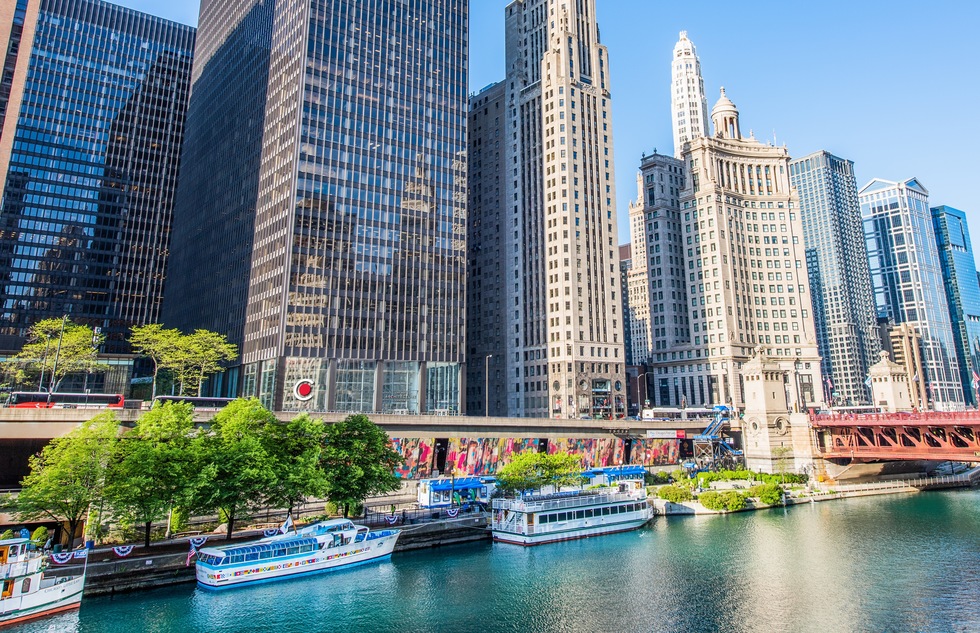 The Chicago River has had about as strange a career as any waterway in North America, starting with its namesake city's decision in the late 19th century (enacted in the early years of the 20th) to reverse the river's course in order to keep sewage out of Lake Michigan.

Of course, that just sent the sewage—including the foul runoff from the same meatpacking factories that gave Upton Sinclair the icks in The Jungle—floating in the other direction, toward points south. But hey, that's Joliet's problem.

Today, Chicago has a complicated water sanitation-treatment system so the downtown portion of the river has been cleaned up considerably.

The onetime drainage pipe now has its own 1.25-mile-long promenade, the Chicago Riverwalk, connecting bars, restaurants, art installations, and launch spots for architecture cruises showing off the city's renowned skyline.

And soon, two more art- and architecture-related additions to the riverfront will be unveiled to the public.

On Friday, August 31, the Chicago Architecture Center will open a brand-new space at 111 E. Wacker Drive. It's a bigger, more modern spot than the nonprofit's former home on Michigan Avenue, and the new location is right above the Riverwalk dock used for the organization's own popular architecture cruises (which Frommer's recommends; read about those here).

Inside the new center, exhibits include a Skyscraper Gallery featuring scale models of some of the world's most iconic buildings, as well as another meticulous scale model of Chicago with tiny replicas of 3,000 buildings. Lights and film projections use the model to recount the history of the city's architecture from the rebuilding period following the Great Fire up to Chicago's current status as a world leader in innovative skyscraping. 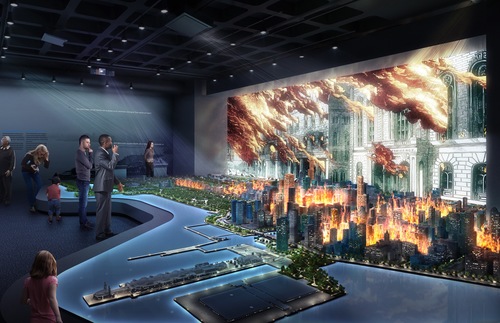 (Rendering of the Chicago Model Experience at the Chicago Architecture Center, courtesy CAF)

About a month after the opening of the Chicago Architecture Center, another new riverside attraction will light up the formidable, 2.5-acre facade of the Merchandise Mart, located a mile downstream.

Dubbed "Art on theMART," the project will use 34 projectors to illuminate the river-facing side of the building in the evenings with a rotating selection of digital works by local and international artists who have been given an awfully big canvas to fill.

Scheduled to launch Saturday, September 29, just after dusk, the spectacle is being billed as the "world's largest permanent digital art projection."

Here's a rendering to give you an idea of how it will look: 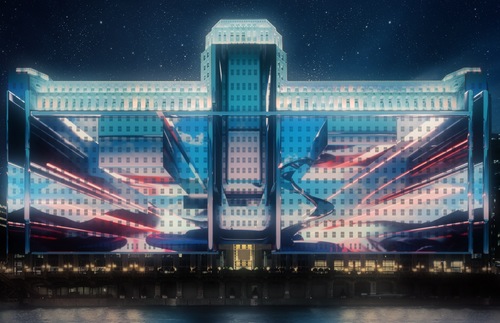 (Rendering of "Art on theMART" courtesy of Choose Chicago)

The plan is to swap in new works regularly in order to supply enough art for two hours a day, five days a week, 10 months a year.

No advertising or corporate branding will be allowed. The project isn't intended to be a billboard for anything but art for art's sake.