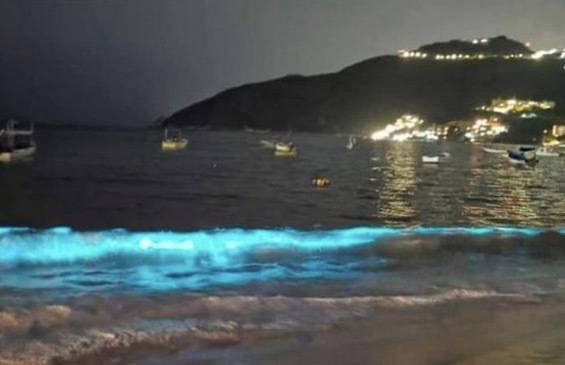 In Acapulco and Worldwide, Bioluminescent Waters Are Back

One of the fascinating lessons from this odd era is how quickly nature can regenerate when humans get out of the way.

So when the bay in the Mexican resort city of Acapulco started glowing in a way that hasn't been seen for 60 years (pictured), many assumed that this, too, might be a result of the long pause humanity has been taking.

Acapulco's event seemed to be echoed by the unusually bright bioluminescence many are seeing off the coast of California as well.

A whale-watching operation called Newport Coastal Adventure posted a mesmerizing video of dolphins dancing in the bioluminescence off the California coast. The company wrote on its Facebook page, "This recent bloom is more intense than we’ve seen in at least 5 years!"

So what's the cause? I asked Juli Berwald, a marine biologist, science writer, and author of Spineless: The Science of Jellyfish and the Art of Growing a Backbone.

"You know when you have one of those light sticks, and you crack it to cause a glow? The system here is very similar," she says. "Luminescence at the surface of the ocean is caused by dinoflagellates, which are single-celled creatures that contain a protein and an enzyme, called luciferin and luciferase. When the dinoflagellates mix those two elements the glow happens."

It's a fairly common phenomenon, she notes. One can often see bioluminescence in the waters outside Cairns, Australia; Vieques, Puerto Rico; Luminous Lagoon in Jamaica; Halong Bay in Vietnam; and other places around the globe.

Berwald thinks that there could be several reasons for 2020's increased brightness off California. "[Increased bioluminescence] seems to occur when the winds are calm and the waters are warm. When the waters are calmer, more dinoflagellates gather on the surface, where we can see them. So it might just be a weather-and-warming occurrence."

Berwald has an additional theory with respect to Acapulco.

"The new moon was April 23, meaning it was very, very dark that night [when the bioluminescence was spotted]. And because there wouldn't be light from the restaurants that usually surround the bay, it was likely darker than it’s been in the last 60 years. So while the plankton was probably doing what it always does this year, the lack of light pollution meant humans could see it."


Bowdoin College Professor Collin Roesler agrees with Berwald that the lack of light pollution is likely a large factor, but she thinks there may be other factors at play, too. "We know from the bioluminescent bays in Puerto Rico that increased development, toxins in suntan lotion, etc. were certainly responsible for the demise of the organisms responsible for these natural wonders," she wrote to me. "Time will tell whether this was an anomalous year, just better observations, or a direct result of the stay-at-home orders. Such a fascinating time to be a natural scientist!"

Whatever the reason, we're looking for natural distractions right now, and this could be a beautiful one. If you're near the ocean, keep your eyes peeled. You may just get a spectacular light show.