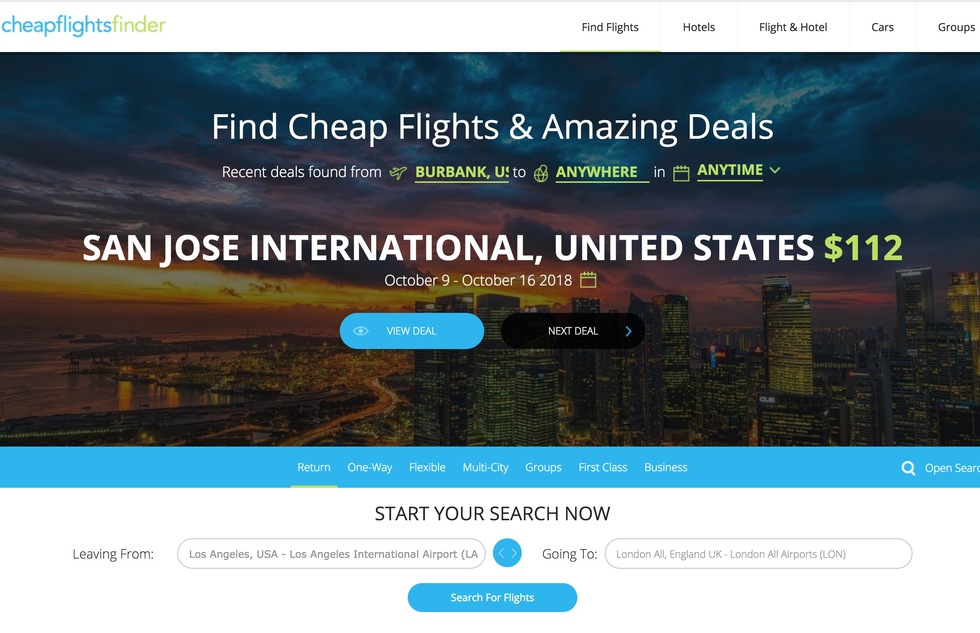 Is This the King of Airfare Search Sites? The Aggregator of Aggregators

For years, we've been telling you that the best places to find cheap airfare are often the "aggregators," which are search engines that scan prices from dozens of different airfare-selling websites to pick out the lowest prices and tell you which site to visit to find them.

But even though these aggregators do their best to level the shopping playing field, or at least to make the shopping game less laborious, there are even differences between their results. Each aggregator site is programmed differently, so there's still room to miss all the best deals.

By simultaneously searching up to 10 big comparison sites (including Kayak, Skyscanner, Momondo, Cheapflights, and Google Flights), CheapFlightFinder is in essence searching some 1,200 vendors at a time. It calls itself the "meta-meta search engine," and it makes money by taking commission from what you book—that's taken out of the price, not tacked on.

Its concept has been around for a decade, but it was relaunched two years ago and re-energized in a slicker form. With one click, it will search the searchers—according to a CheapFlightsFinder test published by London's The Daily Telegraph, CFF is frequently able to point out big differences between the aggregators. In one case, Google Flights claimed the cheapest price was £562 when four other sites found it for around £310. That's a difference of £252, so if you'd only used Google Flights for your aggregator, you'd be paying far more than you had to.

CheapFlightsFinder also dabbles in hotel and car searches, plus a feature on the main page that displays the greatest deals currently going from your home airport.

As with all aggregators, there can be lumps in the batter that reveal themselves in the baking. Sometimes, the cheapest price is discovered on a website you may never have heard of and have no confidence in, which can be unnerving. And other times, the price the aggregators discovered turns out not to be available when you click through to purchase it, which is annoying. But both of these issues are forgivable when you have the potential to save hundreds on a single flight and the method usually works fine. Book with a credit card and you'll be protected.

For Frommer's' own study of the best and worst airfare booking sites, including the top aggregators, click over to our full report.