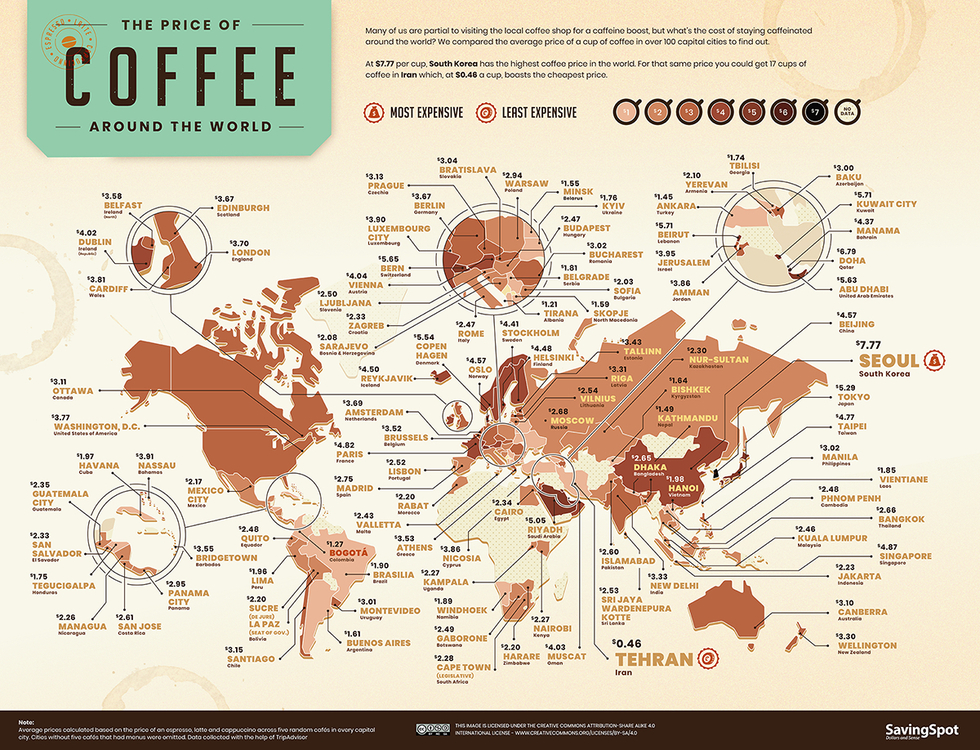 WORLD MAP: Where Is a Cup of Coffee Most Expensive? And Who Drinks it More?

A personal finance site called Savings Spot has been staring at coffee grounds to get some answers about the cost of living in different nations around the world.

The model is like The Economist's long-running Big Mac Index, but with the jitters: By knowing the cost of a cup of coffee in a country's capital, one can extrapolate the costs of other basics.

Savings Spot picked five cafés in the capital cities of 104 countries, looked at their menus, and averaged the prices each one was charging for an Americano (regular black coffee) and/or an espresso, latte, and cappuccino. All prices were then translated into U.S. dollars for ease of comparison.

At the same time, researchers looked at coffee consumption rates around the globe to assess which countries have the biggest coffee habit.

The answers were surprising—and not. I'd say half-and-half.

The title for priciest coffee went to South Korea, where the average cup is a roof-of-your-mouth-scalding $7.77. Is that because the country is more of a tea-drinking nation? That mystery is not addressed by the study.

Second-, third-, and fourth-place pricey cuppas are served in the Middle East: Qatar, Lebanon, and Kuwait, in that order. Rounding out the top five, not surprisingly, is the infamously expensive country of Switzerland.

If you want a really cheap blast of caffeine, you'll need to head to Iran, where a serving is just 46¢. Its next-lowest competitor, Albania, charges more than twice as much ($1.21).

I can personally vouch for the cost, and also the quality, of the third-least-expensive coffee country in the world, Colombia, which grows some of the world's finest beans, and serves up bracingly bitter brews offset by condensed milk. The combination is ambrosial.

As interesting is the data on which nations are fueling themselves with this inky liquid.

Luxembourg may be a tiny country, but its taste for coffee is huge, with citizens apparently consuming 11.1 kg (24.5 pounds) of the stuff in a year. And at $3.90 a cup! 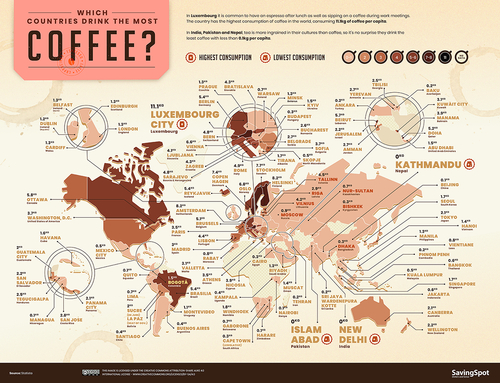 Nepal, India, and Pakistan, as shown on the map above (click here for larger version), drink the least, coming in at just 0.1 kg (0.22 pounds) per capita per year.

To waste your coffee break reading more, click here for the complete results and enlargeable maps.