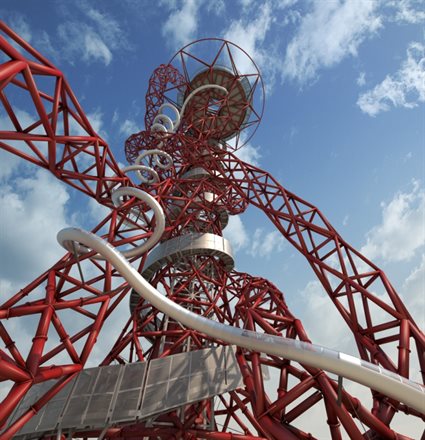 The ArcelorMittal Orbit, a twisting metal tower rising 376 ft/114.5 m from Queen Elizabeth Olympic Park in East London, was built for the 2012 Summer Games. It was bankrolled by a steel concern that was eager to piggyback its brand onto Olympic glory, and it was hoped that "Britain's tallest sculpture," which included an observation deck and much promotion of its recycled steel, would become one of London's great new attractions.

Those hopes did not deliver, partly because there's wasn't much to see from East London once the Olympics packed up and moved on. This year, desperate to turn the Orbit into a player in London tourism, they're sticking a slide on it.

At first, the announcement sounded far too pie-in-the-sky to be likely to happen, but yes, it's really happening. The 40-second tunnel slide, billed as the world’s longest and tallest, will be ridden on a mat and wraps around the structure 12 times. Tickets are being sold now, and it's scheduled to open on June 24, in time for summer travel. (Slides on towers are a big trend this year. The day after that, Los Angeles opens its own.)

The launch has not been auspicious. At an April press conference unveiling the measure as a “major new art installation,” the architect, Anish Kapoor, complained to the media that the mayor had “foisted” the slide on his sculpture. The ride's designer, Carsten Höller, is not English but Belgian.

So far, Web searches for "ArcelorMittal" and "slide" return as many results about the steel company's dramatic recent decline. But who knows—this could be fun.