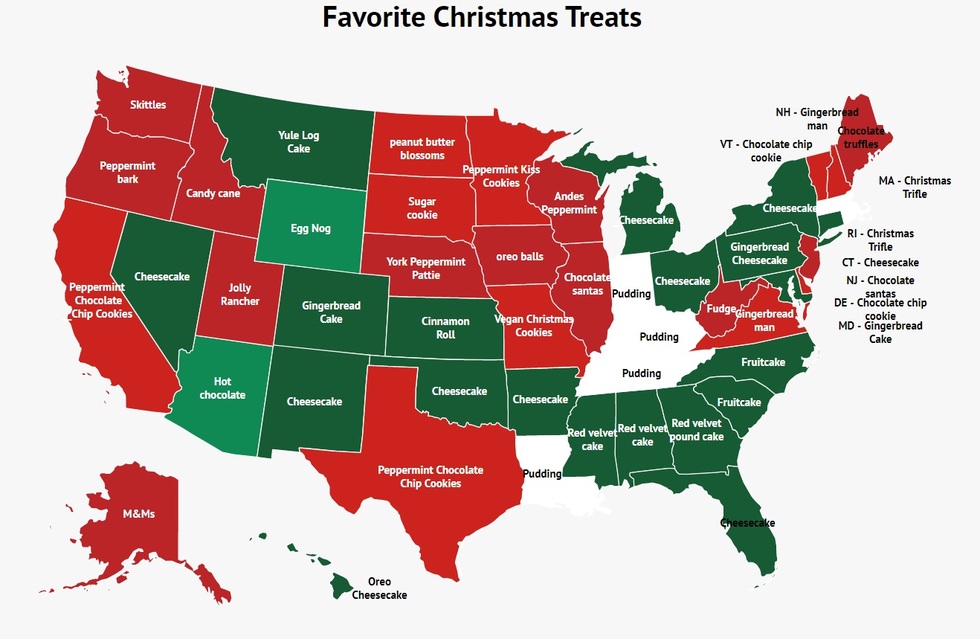 Maps: The Most Popular Holiday Gifts and Sweet Treats Across the USA

It may say something about the slow job market that the folks at the career site Zippia seem to have enough time on their hands to do deep dives into Google search holiday data. But I'm thankful they did, because they came up with a pair of fascinating maps, each of which gives a profile of the American personality, state-by-state.

One map (it's at the bottom of this post, but click here to see a larger version) reveals which gifts were the most searched between November 11 and December 7 of this year. Perhaps unsurprisingly given 2020's in-person shopping situation, the most popular presents this year by far are gift certificates—of all sorts.

Oregonians think it’s festive to give Taco Bell ones, while Minnesota prefers Chipotle. Those in Iowa would rather curl up with a good book purchased with their Barnes and Noble gift card, and it seems Virginians are outdoorsy folks—or perhaps they just like to look like they are, thanks to the REI gift cards they’ll receive this year. Gas cards, grocery cards, and cards for other fast food chains and big box stores rose to the top in other states.

In the realm of actual gifts, you can get an idea of each state's TV viewing habits thanks to Massachusetts' yen for the Disney+ show The Mandalorian and Vermont’s chess set searches based, I assume, on love for Netflix's The Queen’s Gambit.

It’s also clear that California and Colorado are more health-conscious than the rest of the country: Bikes and stationary bikes are the most wanted gifts for those two.

Most unhealthy? Hard to say, but it does worry me that the number-one search in Ohio was for “bourbon subscriptions." I'm also concerned by all the massage guns that will be filling stockings in North Dakota—who would have guessed that was a tense state?

Zippia also took a look at the top searches for holiday treats around the United States (that map is pictured above, but you can find a larger version here), and I think what it found was nothing short of mind-boggling.

Yes, searches were full of Christmas classics like gingerbread, candy canes, fudge, and egg nog. But the most popular holiday sugar-bomb, it turns out, is cheesecake! It’s beloved in 20% of all American states: Arkansas, Connecticut, Florida, Michigan, Hawaii, Nevada, New Mexico, New York, Ohio, and Oklahoma.

Perhaps that shouldn’t be so surprising. Cheesecake is also beloved in many other countries—it's thought to have debuted some 4,000 years ago on the island of Samos in Greece, according to Cheesecake.com. But I, for one, have never associated that dense, creamy cake with any of the December holidays.

Only the Carolinas chose fruitcake, and it looks like only the people of Montana bother to use yule logs consistently.

Long story short, these two maps are a holiday treat in and of themselves. 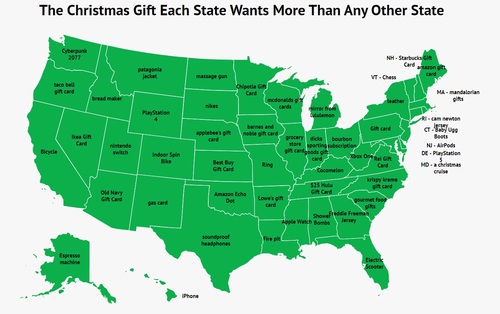