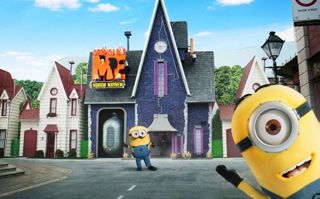 Universal Studios Theme Parks & Resorts, flush with funds from its gajillionaire owner Comcast is going mano a mano with Disney in an all out bid to own the theme park world.  Speaking at an investor conference in January, Comcast’s CEO Brian Roberts vowed that the telecom giant was “doubling down on theme parks.”  Now Universal Studios Hollywood is promoting its newly opened “Despicable Me Minion Mayhem” and “Super Silly Fun Land” and eyeing the landscape of “immersion” environments as the battleground for the theme park of the future.

We spoke with Trana Pittam, Universal Studios Theme Parks Hollywood’s Senior Manager of Publicity last week when she came to New York to promote the new Godzilla-sized “footprint” that Universal is planning to set side-by-side with competitor Disney.  We found out that although the theme park isn’t yet planning a “Godzilla” ride as rumored (he has to be a “franchise” folks, which means he needs a sequel before he gets a ride) the battle of Universal vs. Disney would look a lot like Godzilla vs. MechaGodzilla with Universal laying down some pretty gargantuan steps prior to the opening in 2016 of their “Wizarding World of Harry Potter.”

Those steps include the Minions and their “immersive” environment which Pittam says is much different from the old vignette ride experiences.  “You’re enveloped in that world the minute you step into the ride,” says Pittam.  “It’s a direction Universal is going to keep pursuing in the future.”

The longer lead future will bring “Springfield” an “immersive land” surrounding “The Simpsons Ride” which will open in Spring 2015 and the “Fast & Furious—Supercharged” ride based on the Vin Diesel/Paul Walker franchise.  Pittam says the old Universal’s layout will become “unrecognizable” when the ride debuts next year. The environment includes themed eateries Krusty Burge, Luigi’s Pizza and Phineas Q. Butterfat’s 5600 Flavors Ice Cream Parlor and for the adults, Moe’s Tavern and Duff’s Brewery.

“Fast & Furious—Supercharged” will be situated within a newly constructed 50,000 square foot building on the Universal backlot and will include special effects and 3D-HD imagery projected onto what Universal says will be world’s longest and most expansive 360-degree screen at 400 feet in length.

Pittam says that the park’s new rides will take advantage of franchised films with cross-generational appeal.  What about films that are showing their age? The popular “Mummy” ride was sprung off a then-fun but now-showing-its-age Brendan Fraser franchise. Pittam says that Universal has no plans to retire that particular ride any time soon but that they don’t flinch when they have to take one of the senior citizens out.

“We still get letters from people who miss ‘Back to the Future,’” she says. “But we are moving forward. It's a new day and we have huge audiences for the franchises we are building."