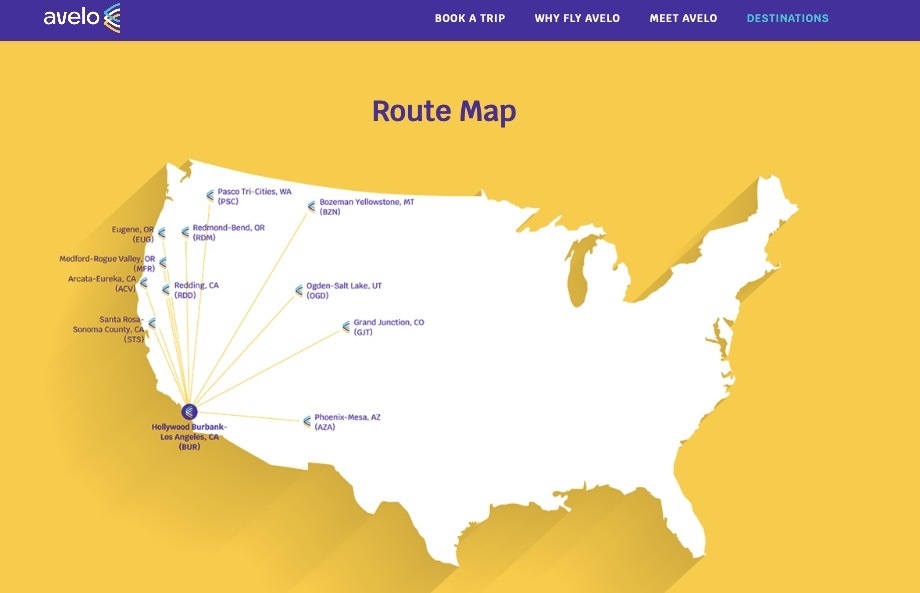 Launching a new airline in 2021 takes chutzpah, cojones, and courage. But that's just what Avelo Airlines has done by debuting a small network of flights from a home base at Hollywood Burbank Airport (formerly known as Bob Hope Airport).

The route network, as you can see above, touches down across the American West. The start-up was founded by Andrew Levy, a cofounder of Allegiant Air and the former CFO of United Airlines.

Unfortunately, with its pricing, the airline seems to be taking a page from Europe's Ryanair: low, low fares but surprisingly high additional fees.

Right now, you might be able to snag a flight for a base price of just $19. But you'll pay almost double that to bring a piece of carry-on luggage into the cabin with you: Bags are $35 in the cabin, but that rate drops to just $10 if you check them, an inversion of the usual industry pricing structure.

There are additional fees for priority boarding ($10) and to choose a window or aisle seat ($5). Also, from the carrier's Contract of Carriage, it looks as if fares are non-changeable, so if you need to revise your plans, you lose the money paid. That could be a barrier for some customers because flexibility is crucial during this pandemic era.

Still, Avelo's prices are damn good. When I looked at round-trips between Hollywood-Burbank and Bozeman, Montana (a gateway for Yellowstone National Park), for June 9 through 16, I was able to find a $43 itinerary through Avelo.

The cheapest option I could find through other carriers for that round-trip flight was $187 on United or Delta. For the Los Angeles area to Phoenix, I came up with $38 round-trip on Avelo versus $91 on the cheapest competitor, Frontier Airlines.

American Airlines has just added flights from Burbank to Phoenix in response to Avelo's arrival, so rates may fall further.

Looking at the same dates for trips between L.A. and Eugene, Oregon, Avelo came in at $38 round-trip, with the nearest competitor, Delta, at $166.

It should be noted that on some routes, like the ones to Bozeman and Eugene, flights are available every other day, which could make scheduling more difficult. On the other hand, Avelo's flights are nonstop, whereas competitors will often require a change of planes.

Right now, Avelo's network is limited. Its hub at Hollywood-Burbank, an easy-to-use airport where flights tend to favor the western half of the United States, could make it difficult to find convenient connecting flights to places not on the current route network.

One other sticky wicket: Avelo does not appear to be on any search engines yet, so you'll need to go directly to the airline's website, Aveloair.com, to research fares and schedules.

If you live in Southern California or near one of the airports Avelo serves, this well may be the most cost-effective way to get from point A to point B, provided you keep fees to a minimum. I'll be watching this newcomer to see how it delivers on its initial promise.