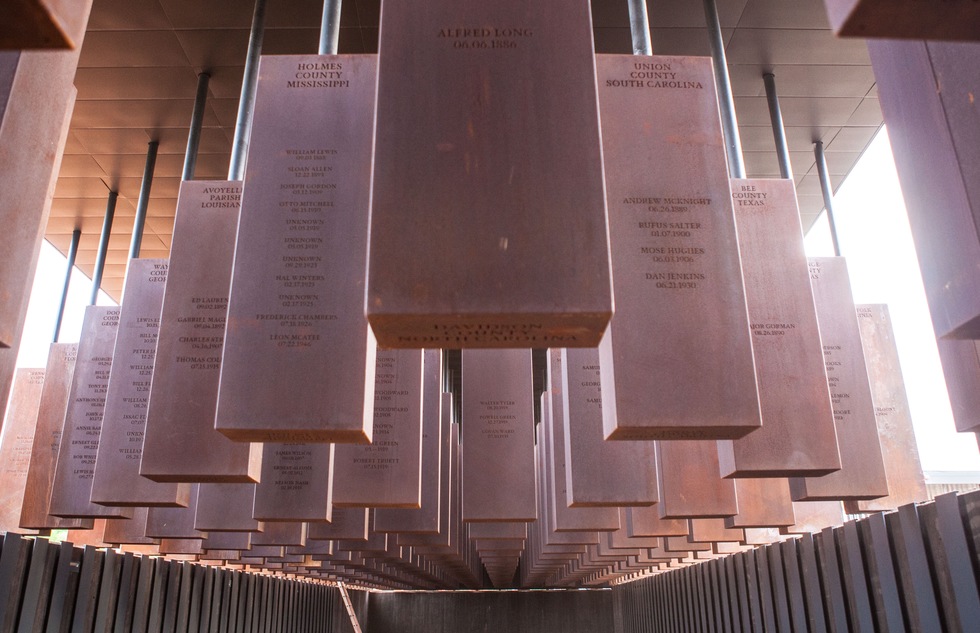 A memorial to the nation's victims of racist terror lynchings opens in Montgomery, Alabama this week.

Located on a 6-acre site overlooking the state capital, the National Memorial for Peace and Justice uses sculpture, text, and hundreds of weathered steel columns to honor the multitude of African Americans murdered throughout the United States by angry mobs and other extra-judicial enforcers of white supremacy in the years following the end of slavery and continuing well into the 20th century.

The memorial's centerpiece is a somber walkway with 800 columns, each inscribed with the name of a U.S. county where lynchings took place, as well as the names of those killed there (or simply the word "unknown" if the victim died anonymously).

The walkway slopes downward so that eventually the columns are hanging overhead, recalling images of "black bodies swinging in the southern breeze," as Billie Holiday put it in Abel Meeropol's haunting anti-lynching ode "Strange Fruit."

Long in the works, the memorial was spearheaded by the Montgomery-based Equal Justice Initiative, a nonprofit that has documented almost 4,400 lynchings that took place across the U.S.

Founder Bryan Stevenson told the New York Times that the group modeled the Alabama project on the Holocaust Memorial in Berlin and the Apartheid Museum in Johannesburg.

As in those cities, the purpose in Montgomery isn't just a reckoning but reconciliation as well. "I’m not interested in talking about America’s history because I want to punish America,” Stevenson said. “I want to liberate America."

As part of that effort, the memorial has an accompanying Legacy Museum that displays lynching photos and artifacts (including jars of soil collected at sites where victims were killed), as well as exhibits detailing African Americans' long history of facing injustice, from slavery through Jim Crow discrimination and on to the mass incarceration of young black men in our own day.

The idea is to tell the truth about the past, understand how it affects the present, and work toward making things better in the future.