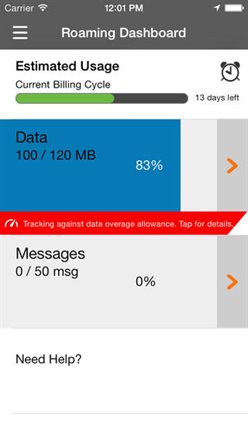 A screenshot from the AT&T International Travel App

It only took more than a decade. AT&T has finally issued a tool to help customers know when they are in danger of exceeding their international usage and incurring wildly inflated fees.

Many a traveler has risked financial ruin by turning on their phone in a foreign country, where per-minute calling rates and data usage rates are mind-bogglingly, irrationally exorbitant. To offer customers an alternative to merely turning on their phone and racking up expenses, like turning on a taxi meter that clocks at warp speed, a while back AT&T introduced prepaid packages that enabled a set amount of international usage for a high, but not backbreaking, price.

But there was no way to easily know how much data you'd spent. AT&T lists the price for data in Europe as "$0.0195/KB". Do you know when you've used a KB of data, or how to do the math from there? It's not as if your map app and language dictionary come with meters that track how many kilobytes they're chewing through. Not everyone could figure out how to find the sub-sub-sub menu where total data usage is logged, either.

Using your phone abroad is a little like going to the hospital in the United States—you're never told how catastrophically you have overspent until the deed is done. AT&T made buckets of cash that way, but it also alienated countless travelers who were assaulted by sticker shock after getting home.

Perhaps realizing that if they made the dangers slightly more transparent, then more customers would elect to purchase its products, AT&T recently released an app, the AT&T International Travel App, that will warn you when you are at risk of exhausting a prepaid international package. Free for the iPhone and for Android, it tracks what you've used and tells you when you're approaching the cliff.

The cheapest way to communicate abroad is still to switch off your mobile phone's cellular capabilities and use Wi-Fi instead. If your phone is out of contract and has the necessary band capability, you can also unlock it and rent a SIM card for a local number (and local rates).

But if your phone is in contract and you want to be reachable on your usual number, most people opt for their carrier's packages. If your carrier is AT&T, you'd be wise to use this app in conjunction with it.