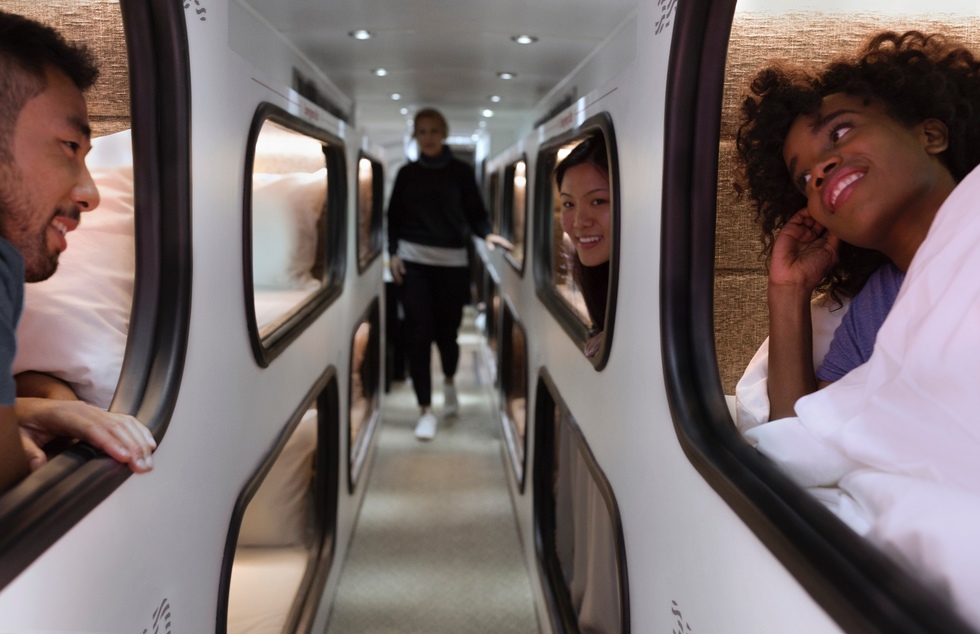 Now rolling (again): the bus that takes you overnight between Los Angeles and San Francisco in your own sleeping pod.

If it sounds familiar, it's because we tried this already. In April of 2016, SleepBus launched for $45 each way, but demand was so strong that its backers were overwhelmed and realized they were onto something. They pulled the product for a complete revamp. This July, it returned to the road, plusher than before.

The concept is still the same. Your seat is actually a "pod" berth where you can lay down as in a Japanese capsule hotel. There's a common area with tiny desks for working, USB ports and an outlet for charging your devices, free Wi-Fi, free coffee and tea, blackout curtains, and free allowance for three pieces of luggage (if one piece is hand luggage).

Owners call it a "moving hotel," and they have a point—even though passengers only have 36 inches of vertical space, pillows are big and fluffy, mattresses are top-quality, and there's an attendant.

The bus leaves at 11 pm and arrives by 7 in the morning. The route would take 5 to 6 hours if you drove it yourself.

The price got a revamp, too: What used to be $45 to $65 is now $115 each way. That's often more than a plane, but it eliminates the need to pay for airport parking and other stresses.

There are downsides: There's no parking near the bus stops. Also, although it goes from a convenient location in San Francisco's SoMa district, the Los Angeles stop is in Santa Monica, on the western edge of the city. The strange depot pairing—the Santa Monica area is rising as a tech center—makes it clear that Cabin's target audience is the affluent crowd that shuttles between the two cities' centers for the digital industry. Google has offices just a few blocks from both endpoints.

Happily, most tourists don't care about parking and they will be perfectly happy dropping off or picking up by the beach in Santa Monica. Until the long-planned high-speed rail connection between LA and San Francisco is finally a reality (current projection: 2029), Cabin is an apt substitute.