Now We Are Free: Paris Says “Merci” on Anniversary of Liberation 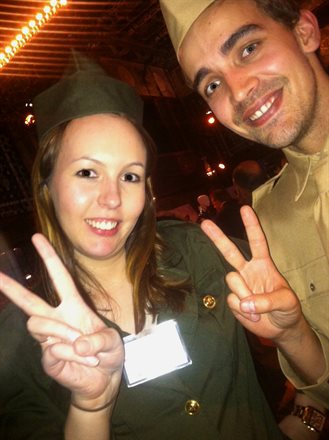 August 19, 1944 began the “Battle for Paris” that culminated in the City of Light being liberated from occupation when the final German troops left on August 25th.

This 70th anniversary year (also the 70th anniversary of D Day in Normandy) the Parisians would like to say “merci” and are doing it in a media campaign announced this week at New York’s Park Avenue Armory.

The commercial, which is unabashedly charming, shows various Parisians saying “thank you” to Americans for their part in the Liberation.  The Paris region is also celebrating with special events, exhibitions and incentives to commemorate the Liberation and to put the lie to the stereotype that the French are rude and won’t speak English to tourists.

An Instagram and Facebook contest at #youarewelcomeparis asks Americans to send Paris their “You’re Welcome” selfies at iconic spots like the Statue of Liberty.  The winners, French Tourism says, will be “treated like royalty” on an all expense paid trip to Paris.

Special museum shows timed to the Liberation anniversary include the free exhibit “Paris Outraged, Paris Martyred, But Paris Liberated,” at the Hôtel de Ville de Paris from June to October 2014.  The exhibit, a moving collection of amateur and reportage photos, private diaries and other personal remembrances of resistance and liberation is named for a famous speech by Charles de Gaulle.  DeGaulle himself is the subject of a permanent exhibition at the museum at Musée de l'Armée - Hôtel National des Invalides, where veterans always get a reduced admission fee of 7.5 Euros down from the regular admission of 9.5 Euros.

The media campaign, “Do You Speak Touriste” which was mounted last year is adding three nationalities to their guide: Swiss, Russian and Indian, a handbook for shop owners and other locals to learn to communicate more effectively with visitors.  There will also be a new online service coming soon which will help visitors find shops and restaurants where English is spoken.