Now You Can Stay the Night at Downton Abbey 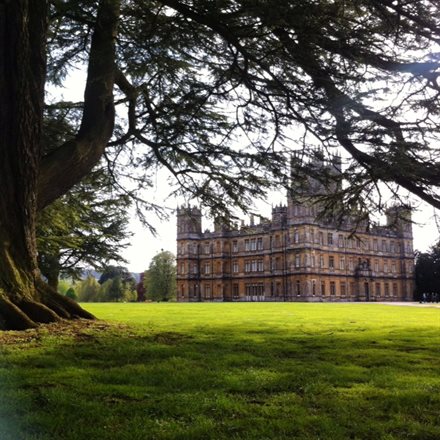 A few years ago, the condition of the English mansion Highclere Castle grew so dire—after years of benign neglect from Earls who were more interested in horses or exploring—that the roof started caving in. And so, to fund its restoration, its current owners decided to open up their glorious home to weddings and filming. They only showed the film crews to the ground floor and first floor, but it was enough. Now the world recognizes Highclere as Downton Abbey.

Now, according to the Los Angeles Times, many of the funds have reached their original target of saving the estate's structures from the neglect of their ancestors. After nearly three years of work, two outbuildings called London Lodge, wrecked after the roof had failed just a few years ago, have been newly reclaimed by the current Earl and countess, and starting on Valentine's Day, tourists can rent a room there.

The decor is considerably more Modern English Cozy (floral prints, blonde wood furniture, Wi-Fi) than the stately wood paneling and original van Dycks up at the main house (on the Lodge's walls, you'll find prints of owls), but that's a quibble. It's well-appointed and you'll be staying where you can ramble some of the most gorgeous lawns of any of the southern English country houses.

The quality is good enough for you: When tourists haven't booked them, the countess' own friends will stay there.

Highclere is in Berkshire, England. Rates start at £350 pounds, which comes to about $550 a night. There's a small kitchen at London Lodge, which is good considering Highclere has only a tea room, and only when it's open to casual visitors, which it isn't most times of year. Otherwise, the lovely town of Newbury is about 15 minutes' drive away, and that's where you catch the train to London Paddington, an hour east.

The fifth season of Downton Abbey has already aired in the U.K. but begins in January in the U.S.

For Frommer's' full description of how to visit the real Downton Abbey on your next trip to London, click here.