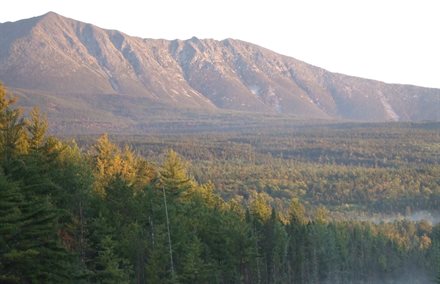 It's located in northern Maine, on 87,000 acres donated by Burt's Bees founder Roxanne Quimby. The monument encompasses the East Branch of the Penobscot River and offers prime views of Mount Katahdin, the state's highest peak.

The designation is not without its critics. Both the Maine legislature and Republican Governor Paul LePage opposed the proposal. Critics argued that the federal government owning the land would hinder efforts to rebuild a local economy once based on forest industries but damaged by the closing of paper mills.

Quimby, for her part, originally wanted the land to be named a national park. But that takes an act of Congress. Designating an area a national monument, on the other hand, can be done by a president acting alone.

As a matter of fact, Obama has protected more natural sites—more than two dozen of them—by naming them monuments than any other president.

And Katahdin could still become a national park in the future. Sometimes monument status is a first step in that direction. Maine's own Acadia National Park, for instance, started out as a monument in 1916 before graduating to parkhood in 1929.