Oldest Structure on National Mall in Washington Being Restored

In 2018, the newest attraction on the National Mall in Washington, D.C., will also be the oldest.

The Lockkeeper's House, which was built in 1835—before any of its more famous neighbors—at what is now 17th St. and Constitution Ave. NW, is being restored and moved back a bit from the street. If all goes as planned, it will soon be accessible to the public for the first time in decades. 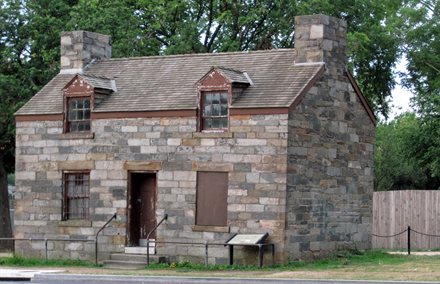 The building dates from the period when the Washington City Canal ran through the heart of the nation's capital, connecting the Anacostia and Potomac Rivers. The lockkeeper who lived here until 1855 managed the canal's traffic and kept its records.

City planners had hoped that the canal would help make D.C. a commercial hub. But the waterway was dirty, smelly, and frequently flooded. In 1872 it was filled in and became Constitution Ave.

The house fell into disrepair while federal offices, gardens, museums, and monuments went up around it.

Now it's getting an inviting new outdoor plaza and, inside, digital displays recounting the history of both the building and the Mall.

Renovations are expected to be finished by early next year.