Pausing for Art in the Napa Valley: A Visit to the Spectacular di Rosa Preserve

White, red, or rose, and whether to sip or spit—those are the choices and considerations that fill the days of most visitors to the Napa Valley wine region. But even the most avid oenophiles usually need to take a break from hour upon hour of vino. And when that happens, many head to the di Rosa Preserve, a sprawling, 217-acre visual arts complex that provides its own form of intoxication.

That’s partially because when you step into the diRosa preserve, you’re entering the idyllic world that Rene and Veronica diRosa created. And in learning about their lives and choices, you’ll take an eye-candy and intellectual tour through the history, and proudly quirky culture, of Northern California.

Rene DiRosa was one of the first in California to realize there was gold in that soil (and in the sunshine and cooling breezes). He dredged a nutrient-rich area to create a manmade lake, taking the dirt from where the lake now is, spreading it over the surrounding hills and planting grapes that, today, are among the most prized in the region (if you see a bottle which mentions “Winery Lake” grapes on its label, snatch it up). In 1986, he sold the vineyards to Seagrams for a pretty penny, money Rene and his third wife Veronica (the artists behind the fake cows you’ll see as you pull in to the driveway) used to start a comprehensive collection of some 2000 works, all created by 800 Northern Californians.

Visitors to the museum can simply head to the free Gatehouse Gallery, but frankly, that’s a hit or miss proposition, as it’s where changing exhibits are housed and they vary in quality. To see the real gems of the collection, you need to take a guided tour with the DiRosa’s erudite and engaging docents, who will either take you hiking through art littered meadows and hills, or to, and through, the art-crammed, former home of the diRosas (now deceased), and its next door hangar of art.

If there is a common thread to what you’ll see, it’s wit. The contemporary artists the diRosa’s collected reject abstract expressionism (for the most part) and, instead, crafted pieces that comment on the culture around them, often incorporating puns and famous sayings into their titles to help guide the viewer. To whit, one of the most delightful pieces in the diRosa’s home is a “punball” machine—actually a pinball machine—by artist William T. Wiley, that replaces the usual action figures with R. Crumb-like weirdos. In the first room of the hangar, a downright hilarious painting by Sandrow Birk called “The Triumph of San Francisco” recounts, in the grandiose manner of French painter David, an imaginary battle between Southern and Northern California. 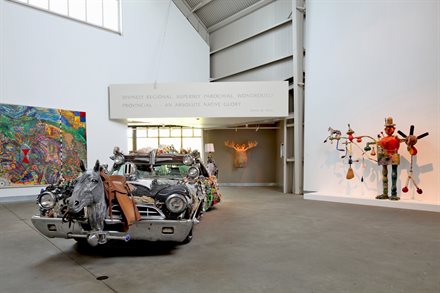 The DiRosa’s also had an eye for pulchritude, and some of the pieces, like the wall of TV sets (by Paul Kos) that show the stained glass windows of Chartres Cathedral in every hour of daylight, are hauntingly beautiful. The same can be said for the many works of David Best, an artist who takes different modes of transportation—cars, horses and carriages—and covers them with a mixture of sculptures, symbols and the detritus of daily life in a way that’s entrancing to view.

In fact, I’d say a visit to the DiRosa will give you just as much of a buzz as a wine tasting will, but without the hangover.

The di Rosa Preserve is located at 5200 Sonoma (Carneros) Highway in Napa. It’s open from 10am to 4pm, Wednesdays through Sundays year round. Tours cost between $12 and $15 per person, depending on length.