A few weeks ago, when Universal Orlando announced it was building a lavish new water slide park, Volcano Bay, for a 2017 opening, it was all over for Wet 'N Wild.

The seminal water slide park opened in 1977 and was the first of its kind in the world, essentially inventing the water park genre that now has far surpassed its tiny acreage and simple ethic. There's no lavish theme, just lots of slides held up by a tangle of metalwork, and families scamper between them mostly on concrete.

Although Wet 'n Wild, which is on International Drive a few minutes' drive south of Universal, still attracts some 1.3 million visitors a year, it no longer has a place in a market where there are three other richly themed, lush water slide parks run by Disney and SeaWorld, which capture guest traffic by adding on admission to their ticket packages.

Universal bought Wet 'n Wild a few years ago, and it is pulling the plug—almost literally—and draining the fun on the last day of 2016. Amusement park and water slide aficionados only have a year and a half to experience the granddaddy of the modern water slide park. 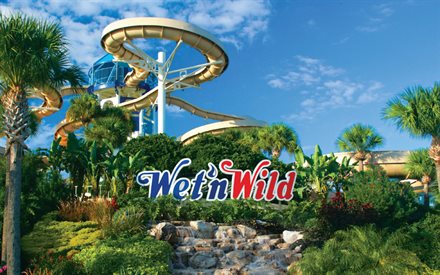