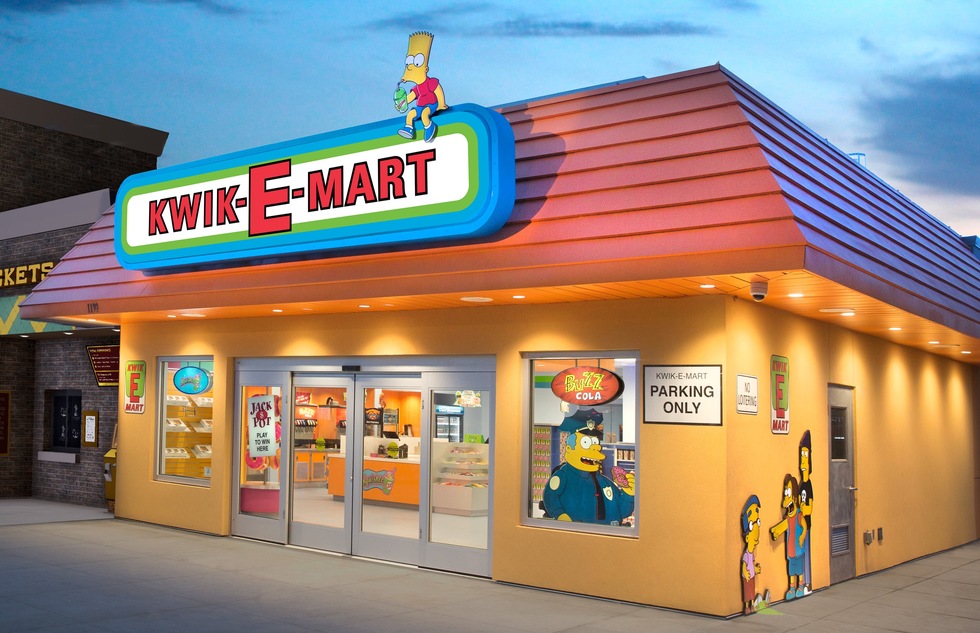 Fans of The Simpsons have a new place to satisfy their cravings for Buzz Cola, Squishee frozen drinks, Heat-Lamp Hot Dogs, and Lard Lad Donuts (what, no Duff beer?).

A full-size, three-dimensional Kwik-E-Mart, the convenience store that frequently appears on the long-running animated sitcom, has opened in Myrtle Beach, South Carolina.

Part of the Broadway at the Beach retail and entertainment complex, the colorful shop is, according to CNN, "the world's first permanent real-life Kwik-E-Mart store."

Apparently, the Kwik-E-Mart outposts at Universal theme parks in Orlando and Southern California don't count, possibly because those are glorified souvenir stands.

You can buy merch relating to Bart, Homer, Lisa, Mr. Burns, Ralph Wiggum, and the other denizens of Springfield at the Myrtle Beach store, too, but it has been designed to look just like the cartoon version, inside and out.

That might dissuade some people from visiting. On the show, the Kwik-E-Mart's proprietor is Apu, an Indian-American character criticized in the 2017 documentary The Problem with Apu for perpetuating negative stereotypes of South Asians.

Apu's singsong catchphrase, "Thank you, come again!" is painted on one of the walls inside the store in Myrtle Beach.

Later this year, another Simpsons-themed attraction will debut next door to the Kwik-E-Mart. Housed in a replica of Springfield's Aztec Theater, the ticketed "4D experience" will feature an animated adventure with live special effects.