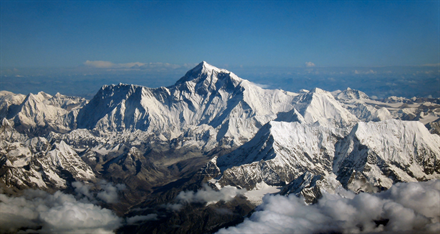 After the April 2015 earthquake and subsequent avalanche that killed nearly 10,000 people, injured tens of thousands, and left hundreds of thousands homeless, the country is finally rebuilding, and you could be a part of that process.

Starting April 12, a 15-day trek to Nepal’s Everest Base Camp will mark the anniversary of the earthquake and raise money to renovate a school in the biggest town on the Everest base camp trekking route.

Trekking company Ace the Himalaya is working to fill a 400-person trek, with $100 of each person’s $1,300 trekking fee donated to rebuilding the school. Shree Himalayan Primary School, the beneficiary, educates 175 students, up through fifth grade, some of whom walk more than five hours to get to school. After the earthquake, however, the school’s walls collapsed and it was forced to temporarily close, depriving the students of any opportunity for education.

“The goal of $40,000 will be enough to build a modern, safe and earthquake-proof school building,” said Prem Khatry, Ace the Himalaya Founder & Managing Director.

The fourteen-person trekking groups will be accompanied by their own guide, porters, lodging, and other arrangements, and the per person rate of $1300 includes all land arrangements and flights within Nepal. Spending each night in a hotel or guest house, trekkers will average five hours of walking per day, and reach a maximum altitude of 5,555 m / 18,220 feet. Aspiring backpackers need not have any experience, though Kathy Kramer of Ace the Himalaya suggests that trekkers have a base level of fitness, saying they should be able to maintain strenuous cardiac output for an hour three times per week. While there is no deadline to sign up, Kramer suggests signing up sooner rather than later as flights will become more expensive last minute.

Along with the $100 per person donation, participants will get to have a direct impact by spending one day working alongside professional builders to help reconstruct the school. Ace the Himalaya has a long history of charitable trips and contributions, including trips rebuilding homes and schools in Annapurna, all of which Kramer says was born out of wanting to help the people along the trek.

“Nepal is safe and open for business,” Kramer says. “The people of Nepal rely heavily on tourism, so the best way for us to help them is to visit the area.”

For more information on Earthquake Anniversary Trek to Everest Base Camp see http://www.acethehimalaya.com/destinations/nepal/nepal-trekking/earthquake-commemorative-trek-to-everest-base-camp-15-days.html

For more information and reservations for this specific trip, contact: Kathy Kramer at 877/306-0650