River cruising is huge in Europe and growing in Asia, but there's one place it hasn't made deep inroads: Southern Africa.

That may be about to change. CroisiEurope, the largest river cruiser in Europe, is poised to expand by begin sailing through the safari grounds along the Chobe and Zambezi rivers on the border between Namibi's Caprivi Strip and Botswana. It joins Fred Olsen's high-end AmaWaterways in the market.

This region differs from other parts of Africa in that unlike semi-arid game viewing at other national park wildlife lands, it's essentially part of a mighty floodplain that gathers moisture from a vast region of middle Africa. CroisiEurope's route will touch upon Chobe National Park, one of the best locations for wildlife-spotting in the region, and enable a side trip to the world-famous Victoria Falls, on the border of Zambia and Zimbabwe.

It's a bold expansion, because it will also incorporate a land-based lodged owned by the company. From CroisiEurope's press announcement:

"• A new, luxurious river cruise ship with capacity for up to 16 passengers in eight exterior-facing deluxe suites with balconies;
• The ship will also have a panoramic restaurant, lounge bar and rooftop patio with pool and chaise lounges;
• New 6-day, 5-night cruise itineraries that will sail along the Chode [sic] and Zambezi Rivers;
• Following the cruise, guests will enjoy a 4-day, 3-night stay in 5-star lodge accommodations, owned by CroisiEurope, with safaris and a day at Victoria Falls included."
With only 18 passengers, you can bet this trip won't come cheap—and airfare won't, either. But it opens up a new section of Africa to a European-style river journey—and if it's a success, it could mean more vessels and somewhat lower prices.
The ship has no name (a rendering is below—befitting the sometimes-shallow waterways in that part of Africa, it looks more like a houseboat than a traditional river cruise ship), but many of CroisiEurope's vessels are named for women in the ownership's family. Voyages begin next year.
CroisiEurope (800/768-7232, www.croisieuroperivercruises.com) isn't taking bookings yet, but watch this space. 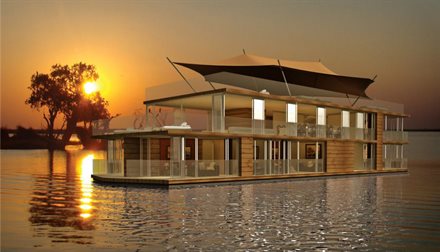