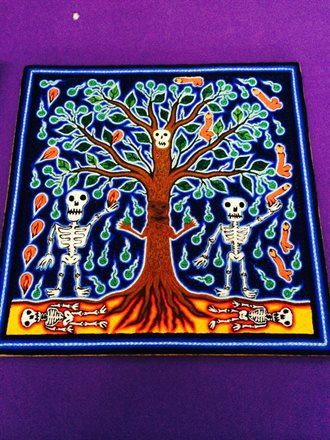 Back in March, I was lucky enough to be in Mexico City (one of my favorite cities) and at the small guesthouse where we were staying, the owner had a striking work of art on the coffee table of the reception room. An actual cow's skull, it was covered with brilliantly colored beads, looking like a cross between something Sol Le Witt and Georgia O'Keefe would have created....had they ever collaborated. Intrigued I asked one of the owners of the B&B (El Patio 77) who had made the work. He told me that it was a Huichol Indian piece and that it had come from the state of Nayarit.

Little did I know, at that point, that I'd be in Nayarit just two months later. And even better, that I'd get to watch one of the most talented Huichol artists of his generation, Cilau Valadez, work.

Valadez doesn't work with beads, though. He's a fourth generation "yarn painter". His canvases are boards of wood which he covers with a mixture of beeswax and resin. Then he painstakingly applies brightly colored yarn to the treated wood, pressing the fibers into the board with either a feather or the tip of his finger. He does this while listening to recordings of the shaman of his tribe chanting prayers, and teaching the creation stories that are central to the Huichol religion. In fact, Valadez considers his artwork a form of prayer. Almost all his pieces are religious in nature.

Interestingly, none of his paintings are plotted out in advance. Instead he lets the work flow from him, and somehow when it does, what he creates are marvelously balanced pieces that seem to jump into another realm. Which is appropriate as all art is seen as a gift for the Gods.

The painting pictured here has a fascinating tale behind it. The Huichols believe that when one dies, one passes through five stages, ending with a visit to the Tree of Knowledge. At that tree, the recently deceased has to confess everything he's ever done, including all the people he has had intimate relations with. The Huichols believe that sex is a serious act, and frivolous couplings leave a mark on a person's soul. In order to be reborn, one goes to the tree, confesses one's past, and the marks are removed. That's why there are, well, floating genitalia all around the tree in this painting. Those who don't confess are left to rot in the earth (you can see them below the tree).

Recently, Valadez accidentally discovered a new way that viewers can enjoy his work. If you look at it with 3-D glasses on, the images within the painting start to float around. It's very definitely trippy.

Valadez' work is found in a lovely gallery in the surfing town of Sayulita (another reason to head there beyond the tubular waves; this is where Mexico's surfing team trains). Or you can purchase them on the web at the site of the Huichol Center for Cultural Survival.