Salem Still Bewitches: What to See In MA's Historic Town 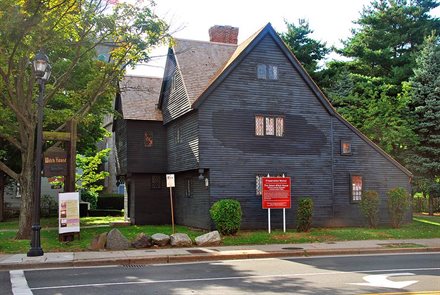 If you’ve been watching TV trailers you may have seen the promos for the new WGN America series Salem.  Taking a page from the popular show American Horror: Coven, which was also about witches and featured a creepy/stylish trailer, Salem features the real characters and story of the 1692 Salem Witch Trials—along with Game of Thrones scene stealing nudity, sex and the ever-popular theme of supernatural goings-on. While the series itself is filmed in Louisiana (what supernatural TV show isn’t?), the sites and stories of Salem, Massachusetts real history haunted past are still very much located in—where else?  Salem, Massachusetts.

The city still prides itself on being a living museum and there’s lots to do and see if you’re fascinated by witches, “real” and imagined.  Start out with The Salem Witch Walk, a $13.00 one and a half hour walking tour that includes a retelling of the real witch trial history, a visit to the Old Burying Point (the second oldest recorded in the U.S. and last resting place of some of the real life trial figures) and concludes with a discussion of "the craft" today.

You’ll also want to spend a few hours on your own in the Jonathan Corwin “Witch House," the only structure in town still standing with ties to the original story.  The 16th century house was the home of one of the trial judges, Jonathan Corwin.  Today, the museum guided house tour (adults $10.25; seniors $8.25; children $6.25) gives visitors a walk back into “witch” history with a good deal of real scholarship and research involved.

Finally, conclude your Salem day trip with a visit to the Salem Witch Trials Memorial. The outdoor monument designed by Maggie Smith (not the Downton Abbey one) and James Cutler is composed of 20 granite benches cantilevered from a stone wall surrounding an area near the Old Burying Point. The benches are inscribed with the names of the 14 women and 6 men who were tried, convicted and executed as witches in 1692—a lasting monument to the facts, rather than the touristy fiction, of the real Salem Witch Trials.

Read more about movies, TV and travel at TravelHushHush.com and on Gretchen Kelly's Twitter Feed @travelhushhush.