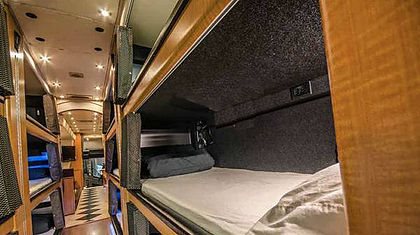 This week, there's been a lot of press about the "Hyperloop" companies that are racing to create magnet-powered trains that will shuttle passengers at the speed of sound inside vacuum tubes. Despite small-scale tests that were loudly turned into into public relations moments, they're still concepts unproven on a large scale that are at least a half-decade away from completion, if they ever reach it.

In the meantime, if you want to get between Los Angeles and San Francisco, as many tourists do, Amtrak takes 11 hours, self-driven cars take six, and the air route can take 5 to 6 hours after getting to the airport and waiting. That leaves the old-fashioned way: By bus.

In April, a new-fashioned old-fashioned way began rolling. It's called the Sleep Bus (www.sleepbus.co), which is actually a customized Volvo trailer truck, and it makes the overnight run between the two cities starting promptly at 11pm and arriving by 6am. But here's the twist: Your seat is actually a "pod" berth, plus a common area with tiny desks for working. There are ports for charging your devices, free Wi-Fi, blackout curtains, free allowance for three pieces of luggage, and if 6am is too early for you to wake up, once it parks you can stay on board snoozing until 9am and before starting your day in your destination city.

Although young travelers think Sleep Bus re-invented the wheel, this is not the first company to try this—Green Tortoise has been offering a less plush "Hostel Hopper" sleeper route ($62) for more than two decades, but these days, it goes so infrequently that something more reliable was demanded.

Tickets on the Sleep Bus's first "prototype bus" have been going for $48, but that's expected to rise to $65, partly because the company says it is building a whole fleet of these things in time for a full launch in late summer. In fact, it looks like the owners have had a devil of a time meeting early demand, since online reviews swing between glowing personal experiences and angry complaints that it's too hard to confirm reservations.

Here's hoping it grows on schedule. The state's infrastructure is decades behind where it should be and something is required.