This past December, I had the priviledge of visiting the White House as part of a convocation of travel writers, brought together by the Obama Administration to get out the word that a new State Department office had been created to encourage students to study abroad. Our morning started with a tour of the White House and though we were given strict instructions not to take photos, being journalists....well, we did anyway. It soon became clear that we weren't breaking any rules. EVERYONE was snapping away—tourists, journalists, that fellow who looked like a spy. Some of us even took pictures with White House guards who smiled for the cameras and cellphones.

I'm not sure whether we were a test group, or whether the prohibition against photos was quietly lifted long ago, but yesterday Michelle Obama made it official: the White House is now welcoming selfies. Though travelers won't be able to bring large cameras on their self-guided tours, small ones and cellphones are just fine.

Now the problem becomes: getting a coveted place on a White House tour. It ain't easy. If you'd like to read our advice on the subject, please click here. 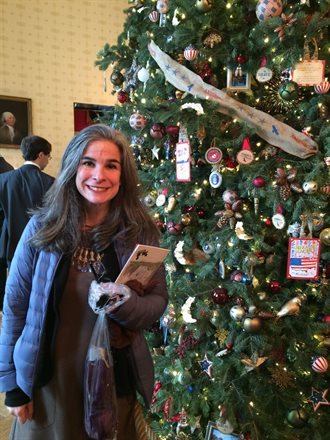